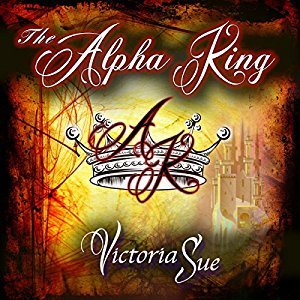 I received an Audible code for a copy of Victoria Sue’s The Alpha King through AudioBookBoom.

Description from Goodreads:
The Kingdom of Askara has been torn apart by conflict for centuries, where humans exist as subservient beings to their werewolf masters. Legend says it will only be able to heal itself when an Alpha King and a pure omega are mated and crowned together, but a pure omega hasn’t been born in over a thousand years.

Luca is an Alpha-heir eagerly awaiting the choosing ceremony on his twenty-fifth birthday and the gifts granted by whichever omega he mates. His small pack is destitute due to the decisions of its ruling council, but being only an Alpha-heir, he has no authority to challenge them. Not until now—this moment he has waited a long time for.
Kit grew up as a street-rat, an unlicensed human who would never be more than a slave for whichever master owns him. Then one day he came across a young Alpha-heir, attacked and dying of poison, and found out their fates were suddenly entwined.

Luca needs to take over his pack and save his people. He cannot afford to be distracted. But when he meets Kit, he develops abilities indicating he is not just a pack Alpha, but the King his world has needed for a thousand years.

Is Kit really the cause of Luca’s newfound power, the true mate he needs? How is it possible when the young man isn’t even a werewolf, and as merely a human, a mating is not only forbidden, but for Kit, a sentence of death?

Review:
I honestly take no joy in writing bad reviews, especially of books that make me want to rant because I was so displeased with them. It’s hard to rein my hate in enough to express my concerns, without just sounding like a harridan. And The Alpha King is one such book.

Even if I overlook a lot of the lack of world-building by accepting this as part of an established Omegaverse, this book is full of plot holes and inconsistencies. Example: One character overhears part of a conversation and illogically jumps to the conclusion that the other has betrayed him. He then reacts badly, doing something public and cruel; we’re talking flat out abusive.

Now this trope is cliched and overused as it is. It is also shoehorned in, as the conclusion jumped to barely makes sense from the conversation heard. But the two characters are TELEPATHICALLY bonded. True, they can’t read each other’s minds, just talk and get a general sense of the others feelings. But it still shouldn’t be possible for one to a) not know the other loves him with his whole heart, b) miss the lack of betrayal in his partner, c) be so cruel to the person he supposedly loves above all else. It makes no sense. Additionally, as a reader I then had to contend with, every time the character said how he loves his partner and would never hurt him, I was forced to call BS, because he had already shown that he obviously would with very little (basically imagined) provocation. And his doormat of a mate would take him back without even an attempt at apology.

The most grievous issue for me however, was that the book is supposed to be about a werewolf who is to become the Alpha King, you know One King to Rule Them All, uniting the disparate packs and freeing the enslaved humans and creating peace with the rebel humans. But the vast majority of the book is dedicated to things like party planning, and jewelry design, and stupid jealousies and delivery of children that is only notable because they are coming from a man. All these big, heavy important issues and the book focuses on the minutia.

It managed to complete an actual story arc only because the characters coincidentally ran into and effortlessly charmed all the people they need to make it happen. It stretched incredulity far, far, far, far, far too far. And this without even touching the politics necessary to make some of the horribly treated, enslaved humans dedicate themselves loyally to the main character, who lets not forget is a werewolf, i.e., their oppressor. (This is ignored for the whole book.)

I could go on, I had so many issues with this book: the way rape is volleyed about every time a villain shows up, the utter predictability of it, the cliches, etc. But I’ll stop. This book and I didn’t get along. Mechanically, the writing seemed fine (or as well as I could tell in a audiobook) and the narration by Joel Lesliewas ok. I, personally, didn’t care for some of the accents (Why were there so many?), but that’s a subjective thing.