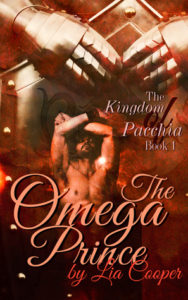 I picked up a copy of The Omega Prince (by Lia Cooper) when it was free on Amazon. It was still free at the time of posting.

Description from Goodreads:
The Tri-fete, an opportunity for the alphas in Pacchia to show off their strength, stamina, and martial prowess, comes once every three years. This is the first time the competition has been held since the Crown Prince Aubrey of Lyle and Wescott presented as an omega and there is much speculation he may take a mate from one of the alphas competing.

But there is more than friendly competition underway as the mysterious Lord Riven returns to court for the first time in nearly a decade and assassins plot against the King.

Prince Aubrey must find a way to balance expectation and personal desire in THE OMEGA PRINCE, the first story set in Pacchia, a mythical kingdom based on the a/b/o gender structure.

Review:
I really quite enjoyed this, though I’m annoyed at it (the series that should be the book, IMO) being broken into so many small pieces and ending on a cliffhanger. Why do authors insist on breaking books into serials? I hate this with a burning passion.

Outside of that issue, I enjoyed the authors voice. I liked Aubrey and Riven as characters. I liked the plotline. I liked that the alpha/beta/omega universe is explained, or at least addressed. So often it’s just presented and not explored and I’m left wondering why pairing have to work the way they do. I also liked that alpha (as well as betas and omegas) could be both male and female.

There was a lot to enjoy here. Granted, the editing is a disaster and, again, it’s pointlessly incomplete. At just over 100 page, it could easily have been expanded into a COMPLETE work. But I’d read the next installment if it crossed my path.