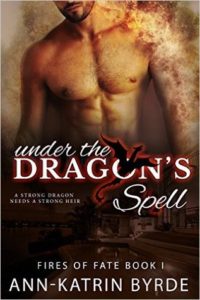 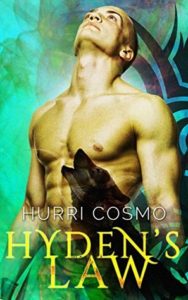 Hyden’s Law, by Hurri Cosmo, is a perma-freebie on Amazon.

Description from Goodreads:
Graham’s had it with Alphas. His experiences with them have been disastrous at best. Even with ones that didn’t tumble him into the nearest bed. So when the chance to move in with another Omega comes up, Graham grabs it. But Graham’s never seen an Omega so big. Plus, he seems to be able to push buttons only an Alpha has. Except trust is something that comes easily to Graham. Hyden says nothing about being an Alpha – so he must not be. Right?

Hyden has just met his fated mate – in the middle of a territorial war. Not the best timing. But now that Graham’s here, Hyden can hardly let the little pup escape, which is what he will do if he finds out Hyden is not only an Alpha but the Alpha. With the Mating Moon scant days away how will Hyden convince the smaller Graham that not all Alphas are selfish bastards? And he’s going to have to because blood fever will not be ignored and Hyden can already feel it taking over his senses. Once it does, there will be no turning back. Hyden might have to resort to handcuffing the pup in order to make sure he doesn’t bolt off into the night. Hmmm. Not a bad thought. He might have to do that anyway…

Review (spoilerish):
I simply could not with this book. I read several hundred books a year and I’m fairly certain I’ve never encountered a character as stupid as Graham, and not in an endearing dim but sweet kind of way. I’d like to start with some quotes to illustrate my point.

“If he didn’t know better, he would swear this man was an Alpha because of all the needs suddenly cramming into his head. Like the desire to bare his neck and offer his submission. Or the craving to bow down to him or bend over for him. But he did know better. This man, as big as he was, was an Omega. The ad had said so.”

“In the couple of weeks Graham had been living with Hyden, the man acted like an Alpha a lot. And now there was the scent of Alpha, too, which was odd. He knew Hyden was an Omega, but ever since his cold had subsided and his sense of smell had returned, a wonderful fragrance of Alpha had filled the house and he thought the aroma was coming off of Hyden. One of Graham’s fears, of course, was that the big man had found someone special. Obviously an Alpha. What else could it be? It made sense, too, since Hyden was always gone, so to get close enough to the big man to tell for sure had become a challenge. Coupled with the way the man was acting, it made Graham truly wonder what the heck was going on. Was he in the way now?”

“That was the other thing; for some reason steady eye contact just seemed impossible with this magnificent Omega. Something Graham only experienced with Alphas.”

“And why was he reacting this way about an Omega with the Mating Moon due to rise in just a few hours. It made absolutely no sense.”

“This infatuation was aggressive and relentless, as if this man were somehow his fated mate. But the gods didn’t work that way. They didn’t match an Omega to an Omega. Ever.”

“Except any large male shifter he had ever met, or even heard about, had all been Alphas, and, now that he was out and away from Jake, there was no way he would ever be involved with another Alpha again. But it wasn’t just that. Graham also had this overpowering desire to bare his neck, to beg to be dominated in every way. He had never felt anything quite like it. Needing to serve, yes. Wanting to be submissive, absolutely. But with Hyden, the feeling was different, more defined somehow. Clearer. Except it could never work, because Hyden was an Omega like him with those same desires, to serve and submit.”

“He pulled it out, and when he looked at it, he started to laugh. It was the ad he thought he had lost. Here it was. A bit smudged from being wet, it had been in his pocket the whole time.”

Let’s break this down. Graham basically lost a piece of paper THAT WAS IN HIS POCKET and ignored EVERY SINGLE SENSE AND BIT OF SENSE telling him Hayden was an alpha because a newspaper ad held more authority than his own observations. What’s more, according to what little world-building there was, the artificial misunderstanding Graham persisted in believing wasn’t even possible. And that’s where my main complaint with this was. Nothing about this felt believable, because there is no way a person with enough of an IQ to remember to put his pants on back to front could maintain such stupid oblivion.

There was also basically no plot beyond the two happening to meet in the most inexplicable circumstances imaginable. No world-building. No character development. Almost no characters outside of Graham and Hayden and none that were of any importance and the title, Hayden’s Law, wasn’t of relevance, as the book basically never leaves the house. I will pass on the rest of this series. 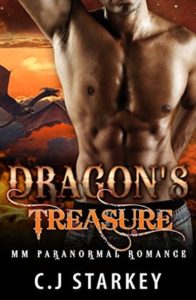 I picked up a copy of Dragon’s Treasure (by C. J. Starkey) when it was free on Amazon.

Description from Goodreads:
Sean has a type, he’s not ashamed to admit, and Jack fits the bill to a tee.

Sean
My life was a blur of work, sleep and the occasional night out. Despite my friends’ best efforts to get me laid on a regular basis I just couldn’t make anything stick.
It didn’t seem like Jack was going to be any different. I made a complete and utter fool of myself more than once and then our first intimate encounter was a threesome with a werewolf shifter. Finding out he was a dragon shifter should have been more surprising than it was but after that first time, I think I knew I wanted him for keeps.
I should have known our relationship would happen on it’s own timeline, completely out of our control.

Jack
Sean was fascinating from the very beginning. He was a contradiction in every sense of the word – I never knew whether to be blown away by his surprising intelligence or by how deep he could stick his foot in his mouth.
I’d had too many flings go sour to be willing to risk it, even in spite of the animal attraction I felt towards him. An old friend not-so-gently encouraged me into it and well, I always did tend to plunge headfirst into things.
Why should this be any different?

A Dragon’s Treasure is a standalone MM story, with steamy love scenes, Mpreg and a HEA ending!

Review:
#DNF at 19%, which is the end of A Dragon’s Treasure. The rest being “bonus stories.” Um, No. I’m pretty sure this is just a collection of short stories, despite what the cover and title say. What’s more, I’m pretty sure this is one of those authors you hear about who is cranking out misleading books for the buck they might make, not for the art or love of writing. Starkey just made my Do Not Buy List. I don’t usually review books I don’t finish, but when I think readers are being scammed an author I feel obligated to highlight it.

To discuss the one short story I read, that was sold as a 200+ page book, it was BAD. It read like a court report. I could almost imagine someone standing there saying, “Just the facts, Ma’am.” There was one rushed sex scene and then a whole rushed romance/pregnancy. No development. No world-building. No indentations or hard returns between paragraphs. No consistency in tense. Reading this was in no way an enjoyable experience, even without factoring in the feeling of being manipulated and tricked by it’s inaccurate presentation.

I’m starting to feel like you have to swim with sharks to trust a book purchase these days.