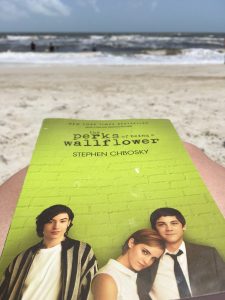 Woo-hoo, I got to read at the beach. This always makes me happy. Anyhow, I picked The Perks of Being a Wallflower (by Stephen Chbosky) out of my Little Free Library. Thank you to whichever neighbor left it. I hope you grabbed a book you liked in exchange.

Description from Goodreads:
The Perks of Being a Wallflower is a story about what it’s like to travel that strange course through the uncharted territory of high school. The world of first dates, family dramas, and new friends. Of sex, drugs, and The Rocky Horror Picture Show. Of those wild and poignant roller-coaster days known as growing up.

Review:
This book has gotten a lot of attention. It won awards, was made into a major motion picture (which I haven’t seen), been included in the American Library Association’s “10 Most Frequently Challenged Books” at least five times. It is worth engaging in and I can totally see why it has garnered the attention it has.

It includes some triggery topics and addresses them in plain, sometime blunt language. It presents young American teenagers of a certain generation doing all the things honest adults of that generation admit were happening when they were young teenagers, even if they weren’t themselves participating, but that the general establishment likes to pretend young teens don’t do (because not all adults are honest): have sex (even gay sex), drink, do drugs, engage in self-destructive behaviors, abuse and pressure one another, etc. It refuses to adhere to the myth of innocent pre-adulthood.

In fact, I think this is the books primary strengths. Americans are very dependent on social narratives about certain things and we struggle to break away from them. Only teens of a certain demographic do drugs or have sex or get into fights. Only certain evil, easily identifiable people pressure others into sex or rape or molest. The problem with these narratives is that they are always oversimplified, artificially dichotomous and often simply wrong, leading to innumerable ways in which the subject of these narratives are open to victimization, injury or scorn.

[This paragraph may be a spoiler.] One of the issues the book addresses that I think is worth special mention is sexual abuse. It pops up in a number of ways throughout the book, some subtle and some not. Most notably Charlie is a survivor of sexual molestation. Our American narrative around such abuse often reads that only evil people would molest a child and that person can’t be anything other than the evil that molests. Now, I’m not apologizing for or excusing child sexual abuse. But that simple abuse-equals-evil-person narrative doesn’t leave room for cycles of abuse in which the abuser was themselves a victim of abuse, or that the perpetrator can also hold other meaningful positions in people’s lives (making the victim feel guilty for their affection). I liked that Chbosky condemned the action, of course, (though it was a bit trivialized) but also allowed for layers and complexity around the issue that is too often missing in stories of abuse.

Having said all that, because there is a lot of appreciate, in the end, I liked but didn’t love the book. I had a hard time engaging in Charlie’s narrative. I didn’t much enjoy the diary/letter writing format, and it’s never stated that Charlie is on the Aspergers/Autism spectrum anywhere, but he must be. Otherwise the naivety of a lot of his observations don’t make a lot of sense to me. They are often salient, but they’re things most people wouldn’t think to comment on or would have observed a lot sooner than their early teens.

All in all The Perks of Being a Wallflower is one of those books people should read to have read them, even if there is no love affair to follow.