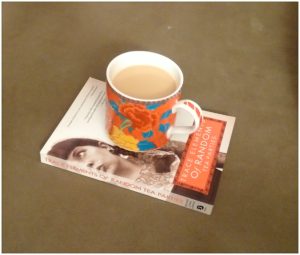 I picked up a copy of Trace Elements of Random Tea Parties, by Felicia Luna Lemus from the used bookstore.

Description from Goodreads:
Leticia Marisol Estrella Torrez, a university honors graduate, moves north to Los Angeles in an attempt to break from the traditional grandmother who raised her and from Weeping Woman, the Mexican folkloric siren who is said to fly through the skies at night to steal troublesome children and who has courted Leticia since her adolescence.

In Los Angeles, Leticia is quickly immersed in the post-punk, post-Queer hipster scene, and after a short-lived affair with the devastating Edith, Leticia meets K, a tall, dark and handsome Old Spice-wearing lovely from Philadelphia. K and Leticia tumble into “candy heaven” bliss, with, to Leticia’s amazement, her nana’s blessing. As her confidence in herself and her own sexuality grows, Leticia moves toward an identity that K refers to as “shy bookworm sweater femme boy”– only to have her newfound happiness brutally shattered by Nana’s sudden illness and by the disturbing discovery that K is not as trustworthy as she seems.

Review:
This had a rough start—the language being overly styled and familiar, characters popping up without introductions, their pronouns being muddled before the reader learns that several are gender-nonconforming, etc. But eventually it smooths out and the book becomes much more readable.

There are some interesting discussions on language, identity and LGBT+ politics here. Set in what I assume was the late 80s or maybe early 90s (cassette tapes were featured) Leti navigates her own identity as a dyke, lesbian, homosexual or what would have once been called a ki-ki, neither/nor (her terms), trying to find what fits both her sexuality and her fluctuating gender. We also feel her marginalized place in both straight society (American and Mexican) and on the gay scene. The world seems to belong to the boys, as she puts it, who occasionally loan the woman a corner to congregate, even if they own all the establishments and maintain VIP areas all to their cis-gendered, male selves. This sense of being outside, even in what should have been friendly spaces was one of the most powerful aspects of the book for me and I appreciated it a lot, along with the descriptions of women who don’t conform to conventional standard of beauty still being sexy and attractive. Yes!

But in the end, I still struggled to find the actual plot. There is some growth in the character, as she becomes sexually active and comes to understand and express her gender, sometimes as a princess and sometimes as a boy/boi. But the book is essentially a description of a succession of crushes and relationships, followed by one lengthy relationship that ends badly. Leaving the book to end on a parable I didn’t particular understand in context. Mixed in there was Leti’s relationship with the Weeping Woman, whose inclusion I never quite understood. Though this may be due to a lack of deep understanding of the place of Weeping Woman within the Mexican American community.

All in all, it’s not a bad book. I enjoyed some aspects of it. But it’s not topping my favorites list.