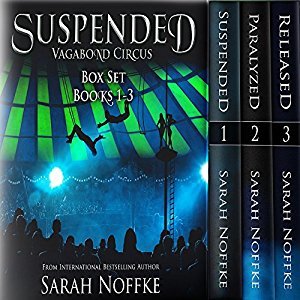 Sarah Noffke was giving away Audible credits for the Vagabond Circus box set, including Suspended, Paralyzed and Released, and I ended up with one of them.

Description from Goodreads:
When a stranger joins the cast of Vagabond Circus—a circus that is run by Dream Travelers and features real magic—mysterious events start happening. The once orderly grounds of the circus become riddled with hidden threats. And the ringmaster realizes not only are his circus and its magic at risk, but also his very life.

Vagabond Circus caters to the skeptics. Without skeptics, it would close its doors. This is because Vagabond Circus runs for two reasons and only two reasons: first and foremost to provide the lost and lonely Dream Travelers a place to be illustrious. And secondly, to show the nonbelievers that there’s still magic in the world. If they believe, then they care, and if they care, then they don’t destroy. They stop the small abuse that day-by-day breaks down humanity’s spirit. If Vagabond Circus makes one skeptic believe in magic, then they halt the cycle, just a little bit. They allow a little more love into this world. That’s Dr. Dave Raydon’s mission. And that’s why this ringmaster recruits. That’s why he directs. That’s why he puts on a show that makes people question their beliefs. He wants the world to believe in magic once again.

Review:
Overall, I enjoyed this series and thought that the narrator, Steve Barnes did a good job on the audio version. I liked some of his voices better than others. I loved Finley’s, for example, but hated Charles’. But it all averaged out. Here are my brief thoughts on the story, written as I completing each book.

Suspended
Pretty good so far, I say ‘so far’ because it’s obviously just part one of the trilogy. It ends on a cliffhanger. But so far I like the plot, the magic system, and the characters. (Though I spent a lot of the book thinking Finley was a total jerk-face.) There is a bit of insta-love, which is annoying. But I kind of see opportunities for it to be explained in the future. We’ll see. I’ll hold of final judgment until I finish the series; all of which I have, since I’m actually listening to the Vagabond Circus Boxed Set.

I do have to admit though that I’ve been really annoyed by the short chapters. Maybe that wouldn’t bother me so much if I wasn’t listening to an audio instead of reading it, but it feels like the narrator is always having to interrupt the story to note, “Chapter 64,” etc.

Paralyzed
Very much a middle book in a trilogy where the books don’t stand alone. But, taking the series as a whole, it’s still fairly enjoyable. The villain has finally been revealed and the primary couple is finally admitting to loving one another.

Released
I generally enjoyed it. I was seriously disappointed that the author seemed to go back on all the diversity she’d included in the series by having the sole queer character (as well as only black main character) die and the only other woman of color that I recall be horrid and also dying. I don’t think you get accolades for including diverse characters (which I was all geared up to give) if you just kill them off.

I also thought that, given that the circus was full of powerful, skilled people, the ending was overly drawn out. But it was still pretty good.

Overall, I enjoyed this series and thought that the narrator (Steve Barnes) did a good job on the audio version. I liked some of his voices better than others. I loved Finley’s but hated Charles’. But it all averaged out. Here are my brief thoughts on completing each book.