I won a copy of Smokin’ Hot Cowboy Christmas, by Kim Redford last year, but never got around to read it. I read it this year as part of my Christmas Reading Challenge. 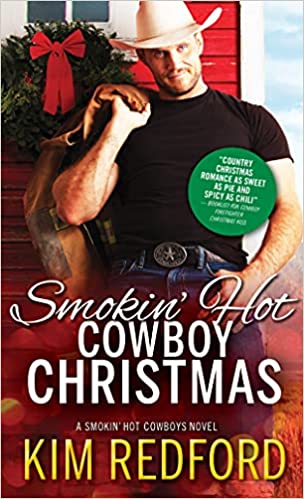 It’s been one fiasco after another for newcomer Belle Tarleton since she began trying to turn her ranch into an arts center. Local workers seem determined to ruin her Christmas party plans, and she hopes bringing in down-on-his-luck Rowdy Holloway to help with renovations will get things back on track.

Rowdy is the unluckiest cowboy in the whole of Wildcat Bluff County, Texas, and things are not improving this holiday season. Sure, he’s the object of many local women’s drool-worthy fantasies, but the town has decided he’s the man who should stop Belle’s renovation plans.

It started as a simple mission, but now Rowdy’s so twisted up he doesn’t know whose side he’s on. With only days until Christmas, Rowdy and Belle need to tap into their fiery personalities and off-the-charts chemistry if they’re ever going to find a way to thaw the ice on this reluctant town’s heart.

This is a spoilery, ranty, ragey, hate review in which I drop a lot of F-bombs. Be warned.

Whenever I’m reviewing a book that isn’t really in a genre I tend toward I usually still try to be objective. What doesn’t work for me usually does work for someone else and my not liking it doesn’t necessarily mean it’s a bad book. Cowboy Romances is one of those genres. I just don’t understand the emotional impact I’m supposed to feel by being reminded someone isn’t just a volunteer fireman, but a cowboy volunteer fireman; not just a businesswoman, but a cowgirl business woman, ad infinitum. Why is that so much better? Why is that anything more than an extra noun—annoyingly used as an adjective—in the middle of too many sentences?

So, I went in to Smokin’ Hot Cowboy Christmas knowing it wasn’t really going to be my cup of tea, but wanting to read it all the same. (I’m doing a Christmas reading challenge that it is part of.) I’d planned to be open to it though. But the reality is that I so disliked the book, in general, that I don’t even know that I can be objective about it. I hated this thing! First off, that description is BARELY accurate. It’s damn near a lie, honestly. But that’s a small thing in the grand scheme of things.

The main issue is that I found no romance in this. All I saw was a wide-spread con and it’s victim. All I recognized was a supposed redemption arc that somehow forgot the redemption part of the plan. If I were to title this review, it would be Fuck Those People, Fuck Every Single One Of Them.

Rowdy and others say over and over again during this book that he’s the unluckiest cowboy in the county. I very quickly realized he wasn’t unlucky, he’s just an asshole. And that was when he was simply lying and trying to sabotage Belle’s business venture to drive her out of town. Then he started sleeping with her, while still actively lying and sabotaging her business, and I thought, “Oh, he’s a huge asshole.” Then he told her he loved her and let her love him in return (while still not stopping the ruse) and I went, “Oh, he’s a supreme asshole.” Fuck that guy, just fuck him!

He was supposed to be all conflicted, but no one forced him. He could have stopped at any point and chose not to, over and over and over again. Fuck Him. He wasn’t in a “pickle” or a “bind” or “between a rock and a hard place.” He made choices. At one point he and the other council members were like, “This isn’t who we are.” And I just went, “Well, it very obviously is, since it’s what you very clearly did and continued to do.”

And this cockamamie plan of the town council made no sense at all, anyhow. No one appeared to have ever actually spoken to Belle about the plans they were trying to derail. No one really knew what her business goals even were. So, the drastic lengths they were trying to go to were just stupid. Fuck them all!

Then, after 360 pages of faffing about there is about a page of apology (not from Rowdy, I might add) that goes like this:

What we did was wrong. As a community, we apologize. We’re here to roof your house as a way of making amends and asking you to stay…Nothing is ever too little too late when so much is at stake. Our county needs you. We need you. We need your smarts, your drive, your vision…and your love.

So, that comes down to We tried to drive you out of town, but we realize we need you now. So please forgive us so we can use you. Fuck Every Single One Of Them! Repeatedly.

And she does. The true depths of the betrayal is never truly addressed. Redford seriously let Rowdy and the county off with inferences and suggestions. And Belle still instantly forgives them. You know what, fuck her too. Not really, she doesn’t deserve it. But fuck Redford for giving me a heroine who can get royally and knowingly screwed over by an entire county and shrug it off as unimportant. Talk about a milksop! It absolutely undermined the whole rest of the book that Redford spent telling us how independent and self-assured Belle was. Apparently she’s willing to be a complete doormat. Fuck that too.

Then there was the utterly farcical side gambit with the missing cow. The cow that was eventually found in what should have been the first place they looked, not the last. It was just annoying as hell. The humor fell completely flat. And the question of the all important roof that the town showed up to repair as their big act of apology and redemption? Well, it wasn’t roofed in the first place because of them. It no longer mattered if it got roofed at all, because they’d already forced her to miss the deadline she was working toward. And if the task was such that the town could simply come together to do it, I have to wonder why the cowboys who worked Belle’s ranch couldn’t simply have been assigned the work at any point in the book.

Speaking of cowboys…the whole mythos of the cowboy that is invoked 14 million times in this book…no one actually is. They’re ranchers who hire people to work their ranches. Those are cowboys. The character in this book are Boss Hogs. They’re the owners who hire cowboys. Fuck Every One Of Those Fat Cats for pretending to be blue collar men and women too.

I hated this book. I could spend half the afternoon telling you all the other ways I hated it. But just know I hated it. Not because I don’t like Cowboy Romance or Christmas books or Western settings. Not because of the writing, which was fine (even if the inconsistencies were annoying—people wearing stocking taking off their jeans or people wearing sweat suits unsnapping their shirt, etc) but because the story is horrible. Fuck those people, every single one of them! 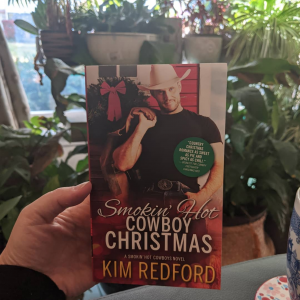 Be sure to come back tomorrow. I’ll be reviewing Where We Begin, by Janey King.