I won an audio version of Sarah Bird‘s Daughter of a Daughter of a Queen through Goodreads. I then managed to convince my bookclub to read it this month, which means I actually got around to reading it. Double win.

Though born into bondage on a “miserable tobacco farm” in Little Dixie, Missouri, Cathy Williams was never allowed to consider herself a slave. According to her mother, she was a captive, bound by her noble warrior blood to escape the enemy. Her means of deliverance is Union general Phillip Henry “Smash ‘em Up” Sheridan, the outcast of West Point who takes the rawboned, prideful young woman into service. At war’s end, having tasted freedom, Cathy refuses to return to servitude and makes the monumental decision to disguise herself as a man and join the Army’s legendary Buffalo Soldiers.

Alone now in the ultimate man’s world, Cathy must fight not only for her survival and freedom, but she vows to never give up on finding her mother, her little sister, and the love of the only man strong and noble enough to win her heart. Inspired by the stunning, true story of Private Williams, this American heroine.

I want to start out with praising Bahni Turpin for her narration. Historical fiction isn’t a genre I gravitate toward and I don’t know if I’d have made it through this one without Turpin’s reading of it.

Next, I want to warn that there is a spoiler in this review. In fact, I should just get it out of the way. SPOILER: Bird does not give these characters their happy ending! Hopeful, I might call it (if 20 years too late), but not happy. I get that Bird may have been constrained by historical fact, but I was still hugely disappointed by this. (And there are so few details available about Cathy that I have to wonder if Bird couldn’t have made it work if she really wanted to.)

Beyond that I appreciated the beautiful use of language (having the audio version really helped with this). And I thought Bird really highlighted some aspects of slave life that gets glossed over in a lot of fiction. For example, when everyone was up in arms over a white girls being kidnapped by Indians and a free slave asking, Who hasn’t seen worse done to our by a Master? Or when a black soldier was speaking passionately about not wanting a white woman (as all white men seem to assume he does), but a black woman. These were moments that touched me and felt real.

A caveat: Maybe it is a simple reality of writing race, but I was never able to allow myself to forget that Bird is white. So, beautiful as these scenes might be, there was always a grain of “It feels right, but I’m white and she’s white, maybe it only feels right to us who have never faced this head on. I hope that’s not the case, but…” Certainly I’ve seen other reviewers take issue with some aspects of the representation. And there were definitely whiffs of Cathy being better than other slaves, which is problematic in the same way writing a female character that is somehow ‘different’ and ‘special’ and ‘better’ than ‘those other girls’ is inherently anti-female in general. So, I leave open that there may be problematic aspects I didn’t highlight.

I did think the story repeated itself at times and dragged a bit through the middle. There were a few “too coincidental to be believed” moments (the prostitute scene, for example) and I just can’t accept the ending. It looped around and gave Cathy something she’d wanted early on and left the possibility of happiness in the future. But that wasn’t enough to really satisfy me. All in all, however, I liked it well enough.

Edit: I had bookclub the other day and we discussed this book, as it was our monthly read. I brought up my opinion that Cathy was a little too much of the “special” girl for my taste, that I thought it was problematic because (as I said above) it infers that had other slaves been more like her they would’t have been slaves. Someone countered that they disagreed. They thought it was supposed to focus on how influential what we’re taught to be is. Cathy was taught to be something and if others had been raised as she was there would have been more empowerment. My friend argued that the moral is meant to be the importance of how children are taught to view themselves. You’ll have to decide for yourself which you think is the right interpretation.

I picked up a copy of Jonathan Frazen‘s The Twenty-Seventh City at Goodwill, because it’s set in Saint Louis (my town). I then suggested it as my bookclub’s November book and it was chosen.

St. Louis, Missouri, is a quietly dying river city until it hires a new police chief: a charismatic young woman from Bombay, India, named S. Jammu. No sooner has Jammu been installed, though, than the city’s leading citizens become embroiled in an all-pervasive political conspiracy. A classic of contemporary fiction, The Twenty-Seventh City shows us an ordinary metropolis turned inside out, and the American Dream unraveling into terror and dark comedy.

I had a really hard time deciding if I liked this book or was just charmed that it’s largely set in my neighborhood. And I mean neighborhood, not just city. Though a transplant, not a native, I live in Webster Groves, where a lot of the book takes place (and apparently the author grew up). There really is a Schnucks on the corner Franzen says there is. The high school team really is the Statesmen. A lot of the attitudes people hold in the book really are ones I’ve encountered in Webster Groves (for better and worse). I live in the not so posh side of the neighborhood from the characters in The Twenty-Seventh City, but it was still amazing to read a book set SO LOCALLY.

If I try to decide how I feel about the book outside of my familiarity with the locale, I find that I didn’t dislike it. I thought it was cleverly written and, though 30 years old, quite relevant to today.  I was uncomfortable with some aspects of it—the villains being so obviously cultural Others, the blatant way race was addressed (though Saint Louis is a notoriously segregated city, so this rings painfully true), the way women who were infidelious all seemed to come to a bad end, while the same wasn’t true for even the skeeviest male cheater. (Rich white men get away with so much after all.)

All in all, however, I have to say it kept me interested 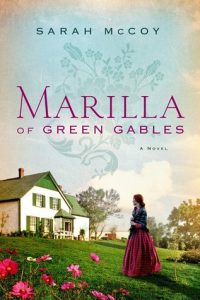 I won a copy of Sarah McCoy‘s Marilla of Green Gables through Goodreads. I then took it to book club with me and the group chose it as our November book.

Description:
Plucky and ambitious, Marilla Cuthbert is thirteen years old when her world is turned upside down. Her beloved mother has dies in childbirth, and Marilla suddenly must bear the responsibilities of a farm wife: cooking, sewing, keeping house, and overseeing the day-to-day life of Green Gables with her brother, Matthew and father, Hugh.

In Avonlea—a small, tight-knit farming town on a remote island—life holds few options for farm girls. Her one connection to the wider world is Aunt Elizabeth “Izzy” Johnson, her mother’s sister, who managed to escape from Avonlea to the bustling city of St. Catharines. An opinionated spinster, Aunt Izzy’s talent as a seamstress has allowed her to build a thriving business and make her own way in the world.

Emboldened by her aunt, Marilla dares to venture beyond the safety of Green Gables and discovers new friends and new opportunities. Joining the Ladies Aid Society, she raises funds for an orphanage run by the Sisters of Charity in nearby Nova Scotia that secretly serves as a way station for runaway slaves from America. Her budding romance with John Blythe, the charming son of a neighbor, offers her a possibility of future happiness—Marilla is in no rush to trade one farm life for another. She soon finds herself caught up in the dangerous work of politics, and abolition—jeopardizing all she cherishes, including her bond with her dearest John Blythe. Now Marilla must face a reckoning between her dreams of making a difference in the wider world and the small-town reality of life at Green Gables.

Review:
I devoured this, but had a mixed reaction to it. I loved Anne of Green Gables when I read it as a teen. It would be difficult for this book to compare. I admit that up front. Having said that, I think that if I hadn’t been invested in Mathew and Marilla from their association to Anne, I’d have been bored to tears by this book. As it was, I appreciated the stellar writing and thought McCoy gave Marilla an unexpected history, but never truly lost myself in it.

Mathew and Marilla are quite characters. That’s established canon. They feel deeply, but express little. And essentially that’s where this fell down for me. This book follows 40 or so years of Marilla’s life and we finish the book not really knowing anything more about her than when we started. She’s emotionally stunted and unwilling to go after what she wants. Does she do something heroic once in her life? Sure, but mostly that’s just arranging for someone else to do all the work. I suppose I had hoped for a bit more than 300 pages of Marilla’s stoic navel gazing.

I rated it highly though, because disappointed in it or not, it’s beautifully written.