I picked up a copy of Elin Wyn’s Given as an Amazon freebie. 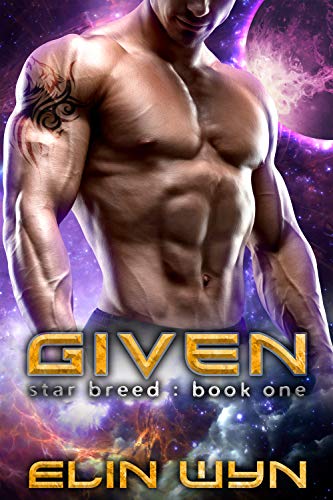 The last thing this warrior needs is a sexy thief – even if her scent drives him to madness.

Davien will do whatever it takes to get back into space. The last thing he wants is a smart-mouthed thief – even if her scent drives him wild – and she may have the clue he needs to hunt down whoever destroyed his home.

Thief Kara Shimsi has learned three lessons well – keep her head down, her fingers light, and her tithes to the syndicate paid on time.

But now a failed heist has earned her a death sentence – a one-way ticket to the toxic Waste outside the dome. Her only chance is a deal with the syndicate’s most ruthless enforcer, a wolfish mountain of genetically-modified muscle named Davien.

The thought makes her body tingle with dread-or is it heat?

Caring is a liability. Desire is a commodity. And love could get you killed.

This was fine entertainment. I didn’t hate the characters, which isn’t a given for sci-fi romance. As much as I sometimes love an alien romance. It’s not uncommon for the aliens to lean so far into alpha a-hole territory that I can’t bear the gender dynamics that result. So, the fact that Wyn didn’t do this and therefore I didn’t hate the romantic leads is actually a point worth mention and praise. The writing is clean and easy to read and I don’t remember any big editing mishaps. So, fine entertainment.

It’s not deep though. There’s not enough world-building or character development. The romance isn’t particularly developed and it’s not explicitly fated mates to excuse its lack of development. And while the book ends reasonably, I didn’t feel it quite reached a happily-ever-after or even a happy-for-now. It felt just a little too soon for that, like the book needed a few more chapters of wrap-up before that was a safe assumption.

All in all, however, for fluffy entertainment, it did it’s job. I’m not a fan of the cover though.