Several years ago, I picked a used copy of S.M. Stirling‘s The Sky People. Well, more accurately, I picked up a copy of the sequel, In the Courts of The Crimson Kings without realizing it was a second book and then went back, found, and bought The Sky People. I finally got around to starting the series. 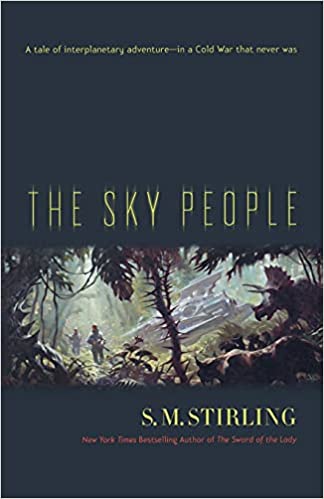 Marc has been assigned to Jamestown, the US-Commonwealth base on Venus, near the great Venusian city of Kartahown. Set in a countryside swarming with sabertooths and dinosaurs, Jamestown is home to a small band of American and allied scientist-adventurers.

But there are flies in this ointment – and not only the Venusian dragonflies, with their yard-wide wings. The biologists studying Venus’s life are puzzled by the way it not only resembles that on Earth, but is virtually identical to it. The EastBloc has its own base at Cosmograd, in the highlands to the south, and relations are frosty. And attractive young geologist Cynthia Whitlock seems impervious to Marc’s Cajun charm.

Meanwhile, at the western end of the continent, Teesa of the Cloud Mountain People leads her tribe in a conflict with the Neanderthal-like beastmen who have seized her folk’s sacred caves. Then an EastBloc shuttle crashes nearby, and the beastmen acquire new knowledge… and AK47’s.

Jamestown sends its long-range blimp to rescue the downed EastBloc cosmonauts, little suspecting that the answer to the jungle planet’s mysteries may lie there, among tribal conflicts and traces of a power that made Earth’s vaunted science seem as primitive as the tribesfolk’s blowguns. As if that weren’t enough, there’s an enemy agent on board the airship…

I thought this was an interesting science fiction read. Specifically, I thought the small earth-related news clips at the beginning of each chapters interesting, as well as the discussion around what finding other inhabitable planets would do to earth-side politics. I found this almost more engaging than the daily drama of the rest of the book, honestly.

I did like the idea of the dinosaur-age earth-like planet being settled by humanity. I liked the characters (though none of them are particularly deep) and the how-did-this-happen evolutionary mystery. I don’t think anyone will be surprised by much of what they find here though. While the political and social set-up is intriguing, the actual events of the plot I found painfully predictable, especially the rather abrupt ‘and it all worked out’ ending (prior to the epilogue which is a lead-in to book two). I also thought it rambled a little in the middle and there was a whiff of ‘bringing enlightenment to the noble savages’ to it. But it wasn’t overpowering. There is a man and his dog though, and that made up for a whole lot.

As I said, I also have book two (In the Courts of The Crimson Kings) and do plan to read it. But I don’t think I’ll dive right into it at the moment. 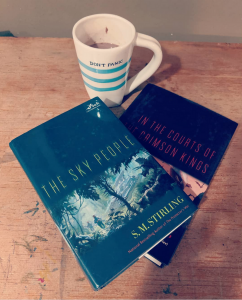 Review of The Sky People by S.M. Stirling