I purchased ecopies of His Secret Illuminations and His Sacred Incantations, by Scarlett Gale. I read them back to back. So, I’m going to review them together. You can apparently buy signed copies from the author, which I wish I’d known before supporting the Zon. But oh well, hindsight is 20-20 and all. 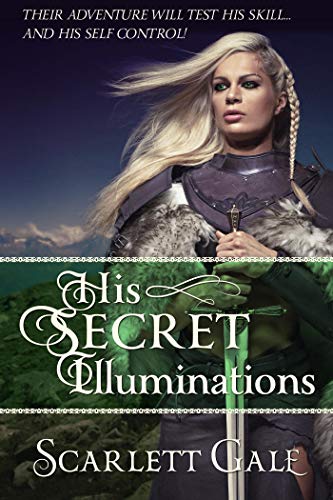 By day, Lucían brews potions and illuminates manuscripts in service to the monastery that took him in as a child, wielding magic based in his faith and his purity. By night, he dreams of the world outside the cloister–a world he knows only in books and scrolls…

A mercenary known as the She-Wolf hunts for a shipment of stolen manuscripts. When she needs a mage to track them down, she chooses Lucían for both his adorable blushes and his magic. She purchases his contract, hurling him headfirst into an adventure that will test both his skills and his self-control…

Inexorably drawn to the She-Wolf’s strength, surprising kindness, and heated touches, Lucían fights temptation at every turn. His holy magic is both vital to their mission and dependent upon his purity. How can he serve both her and the Lord if he gives in to his desire? As intrigue and danger forces them closer, how can he possibly resist?

I saw His Secret Illuminations recommended in a Fantasy Fans forum where someone had requested books with strong, martial women defending weaker, nerdier men. I’ve read a couple books recommended in that thread and, I have to say, this is the first one that REALLY fits what the OP was asking for and I really enjoyed it. I went right out and bought book two on finishing this one, in fact.

Having said that, I’ll acknowledge that the plot is slooooow. So slow you have to occasionally remind yourself that there is one. So slow that it’s clear that it’s really just the set design that Lucian and Glory’s burgeoning relationship plays out against. Usually I’d have a problem with that. But, honestly, I just love Lucian so much I couldn’t bring myself to care. I liked Glory too, but the book is from Lucian’s POV and he’s just a marvelous character.

And I just adored seeing so many tropes and unspoken expectations turned on their head. There’s the obvious, like Glory being significantly larger and stronger of the two. But there’s also subtler things like her being a deadly warrior, but not also being the literary equivalent of an emotionally stunted man with tits. She wears makeup and dresses, does needle point, has ‘monthlies,’ etc. She is both deadly and allowed to express traditionally female traits. This is a lot rarer than you might think. So often authors seem to think being strong means being manly and therefore a strong woman isn’t allowed to simultaneously be womanly. I really liked seeing Gale not fall into that trap.

The writing is quite readable. The book is genuinely longer than it needs to be and a word, phrase, or mentality clanged as anachronistic on occasion. There is definitely a bit of what feels like modern mentalities being painted on historical peoples. But it’s fantasy, so Gale’s free to do that. It certainly makes for more pleasant circumstances. All in all, I can’t wait to jump into His Sacred Incantations. 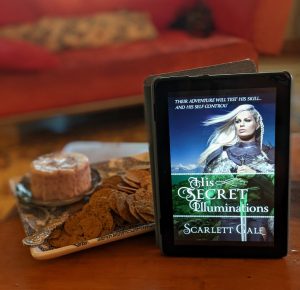 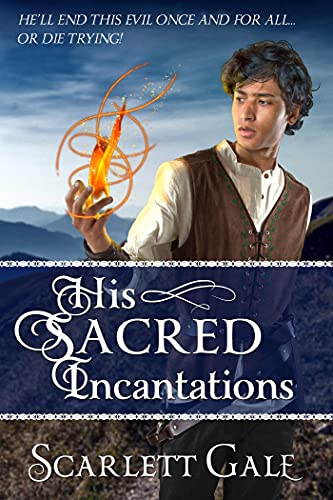 Lucían left behind his cloister, his vows, and his self-denial when he joined Glory, first for a quest and then in her bed. He tells himself he should be happy, but when he looks at her strong arms, her sharp smile, and her easy dominance, he wants, wants something he can’t put a name to…

Something dangerous lurks in the mountains above Granite Falls, something with fangs and claws and a horrible curse. No one has yet found the cause, and Lucían can’t help wondering why it all seems so familiar, and why his dreams are full of cold stone and dark magic…

When the source of the attacks turns out to be something from Lucían’s past, he finds himself once more embroiled in an adventure he wasn’t expecting. He’ll end this, once and for all, or die trying… But his friends from the Warrior’s Guild won’t let him do it alone!

This is a hard book to review. Because I liked it. There’s no denying that. But I so liked book one and just don’t feel like this one stands up to it. And it’s hard not to let my disappointment color my objectivity and general opinion.

Like His Secret Illuminations (HSI), the writing here is fun and easy to read. It’s full of a diverse and quirky cast of characters, all of whom I like. But unlike HSI it didn’t have the glorious sexual tension to carry the long, slow plot. Instead it had all the sex instead. And while I enjoy a good sex scene (and I’ll grant that the scenes here were at least varied) I eventually started skimming them because I was bored of them. I felt like they got in the way of the plot.

Plus, while HSI was full of Lucian’s internal conflict, which grabbed and held me rapt. His Sacred Incantation has Lucian and Glory’s wholesome love. And while that’s not a bad thing, it too became super repetitive. For example, my kindle tells me the word love was used 131 times in the book. Between calling each other “my love” and telling each other that they love one another that’s a lot of love. What’s worse, my kindle also tells me the word kiss (or variations of the word—kissing, kissed, etc) was used 168 times. And that’s just kiss; it doesn’t include “pecked on the cheek” or “pressed her lips to his temple,” or any of a million other ways to describe a kiss. The book isn’t even 400 pages long. That’s an awful lot of kissing going on, like more than one every other page! I just got bored with it all. It’s sweet, but sweet won’t carry a book like internal conflict will, in my experience.

Lastly (and I’m not entirely sure how to phrase this), some of the kink-play felt too recognizably modern to fit the fantasy setting. While I’m well aware that there really isn’t anything new under the sun, humans have done it all before, when Gale brought out the kinky collars and leashes (for example) if just felt so very like this moment in time, instead of the fantasy historical time period of the rest of the book. It’s not that I didn’t think it fit Lucian and Glory’s kink, it’s that I felt like the kink being expressed in such a stereotypically recognizable way didn’t fit the the fantasy world. Like maybe Gale was trying to catch the market since that was, after all, fairly common trope in erotica for a while. It stood out from the rest of the story, the leash especially.

All in all, this is a likeable book. Despite my complaints, I liked it. I’ll probably read anything Gale puts out after this. But I simply couldn’t like it as much as HSI and that’s a shame. 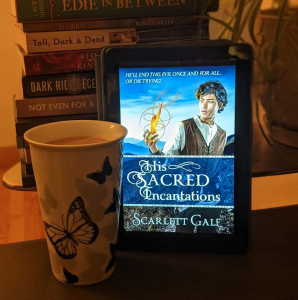