I accepted a copy of Witchblood for review. The graphic novel was also featured over on Sadie’s Spotlight. So, you can hop over there for the tour schedule and for information on the author Matthew Erman, artist Lisa Sterle, colorist Gab Contreras, and letterers Jim Campbell and Andworld. 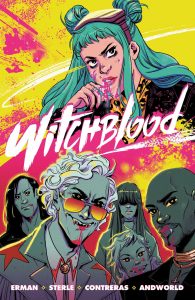 A modern, Wild West road trip about a witch named Yonna cruising the Southwest as a band of bloodthirsty biker vampires, The Hounds of Love, hunt her scattered coven for the source of all magic: witch blood. From the critically acclaimed creators of The Modern Witch Tarot Deck and Long Lost comes Witchblood, a blend of action, lore, and Americana—perfect for fans of Buffy and American Gods.

I liked the art a lot. And, while I know it’s an itty-bitty little thing, I cannot tell you how much I loved that Yonna had armpit hair! I liked some of the way the world is changed. Women in the confessionals and Mother Superiors giving orders, for example. It also blends humor and horror, with a punk-ish dystopian Wild West vibe. If I say it felt super Tank Girl-like, will I be showing my age too much? Actually, now that I’ve said that, Lori Petty would make a great Yonna, IMO.

But the whole things sags on story. I wouldn’t say I disliked it. But I wasn’t blown away by it for a few reasons. For one, the pacing is off. It meanders through the first half and then rushes through the second, where arguably the more important action happens.

But the real issue for me is that here you have a story full of powerful women— a female deity, all of her female witch descendants, some female hex hunters, and a female vampire with important knowledge. But the story hinges on a man. The vampire with knowledge doesn’t use it herself. Noooo, she gives it to a man. And he becomes the cliched villain while she clings wordlessly to his back through out the story. Where this graphic novel had an open opportunity to do something interesting, it instead trod the dull, well-worn path. It just felt cheap and unoriginal.

All in all, I’d call this a middle of the road read. I merely enjoyed the graphic part more than the novel part. 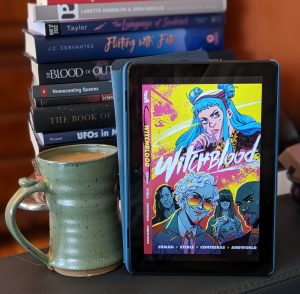