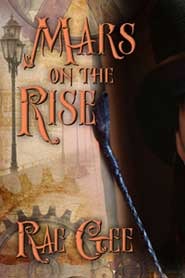 Author, Rae Gee, sent me an ecopy of her M/M stumpunk novel Mars on the Rise.

A storyteller steps off a pier and into a world of steampunk oddities, fearsome weapons, and a dangerous man. Promised fame and fortune by the country’s largest weapons manufacturer, Cedo gratefully falls into the arms of Erus Veetu. Dark, dangerous and with nothing to lose, Erus shows him that Svenfur isn’t all Cedo thought it was. For beneath the streets is a dark, gas lit world of slavery, human sacrifice, and deadly machines. With the machines waging war in the East, can Cedo stop the country’s deadliest man from bringing it to the shores of England? Or is he too late to penetrate the cold exterior of his Master and halt the cogs and gears of progress?

I love what Mars on the Rise is trying to do. Pairing the pure Cedo with the evil warlord (Erus) who is actually trapped in his role and longing to be a better person is pretty classic stuff. Gee’s description of the environment is such that the reader is easily able to imagine it. The characters of Cedo and Billy are fairly well rounded, though Cedo does seem so innocent that you wonder how he even survived at all. Erus’ character isn’t as clear, but since the story is predominantly from Cedo’s point of view and he is confused by Erus’ personality too, this isn’t really problematic. The writing is crisp and clear. It seems to have a storyteller feel to it. Which matches the main character really well.

The problem is that the reader never sees why Cedo follows and falls in love with Erus. Erus just shows up, says follow me and Cedo does; no questions, no getting to know each-other, or good times before things go to shite. But Cedo dedicates himself to Erus all the same and you wonder why. If you’ve ever read any Yaoi manga you see the same thing. In a 25 page short you have to accept that there isn’t time to establish everything, but in a 300ish page book it is fair to expect more. The reader also always wonders why Cedo stays. There is a fairly predictable pattern, every-time the two of them have a loving or enjoyable time, something horrible happens to disrupt and ruin it. So you don’t really see the good times Cedo refers to.

This is the first in a series and I see real potential for the continuation of the series. The last few chapters really redeemed the book in my mind. With Cedo and Erus’ love finally declared (even with Billy still confusingly still in the middle) I think a lot of the story’s maudlin nature will fall away, leaving a strong adventure plot behind. Certainly Gee has the writing skills to pull it off and I look forward to reading it.