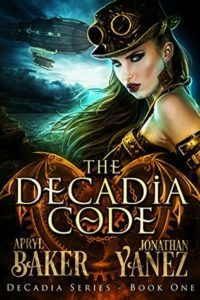 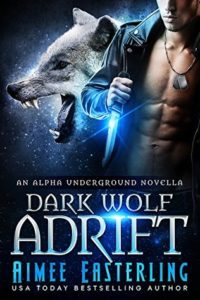 I downloaded a copy of Dark Wolf Adrift, by Aimee Easterling, when it was free on Amazon.

Description from Goodreads:
Hunter Green attracts territorial shifters like moths to a porch light. Sick of beating up on pups who don’t have the sense to back down from a challenge, the alpha finds peace as a warrior in the human-only military.

Unfortunately, his strong inner wolf isn’t content defusing bombs and battling sharks. Instead, the beast emerges, nearly tearing the limbs off a poaching shifter before setting its sights on Hunter’s human dive mate.

No longer able to trust his animal half among defenseless humans, the outcast alpha struggles to reenter shifter society. But will his tenuous grasp on werewolf politics be enough to stand up against backstabbing pack leaders intent upon expunging Hunter’s last shred of humanity?

Review:
It’s not horrible, but, um, it’s not very good either. It just felt really rushed, unsupported, AND UTTERLY RIDICULOUS. A wolf fights a shark. I’m just gonna drop that in here and let you imagine it. OK. Right. Moving on.

Having an uber-alpha who is worlds more powerful than any other wolf tell you in first person how awesomely powerful he is didn’t work. The whole premise of leaving the Navy because his wolf decided someone had betrayed him didn’t make sense, as the person pointedly didn’t betray him. The main character is super powerful, but like a puppy in seeking praise and his attitudes flip flop as he finds information he should have simply sought in the beginning. Lastly, the solution he found to a culture-wide social problem was so simplistic as to be ineffectual. It wouldn’t actually solve the problem and does nothing for the vast majority of victims who don’t happen to be ‘pack princesses.’

The idea of the bloodling was interesting, but I didn’t think it was well integrated into the story or explored very deeply. If I found the sequel free, I might read it. I wouldn’t pay for it. 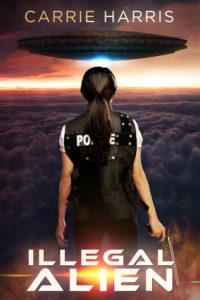