I enter a lot of giveaways for books. Honestly, it’s a bit of a compulsion. Though I always intend to read them, some of them end up sitting on my shelves for quite some time before I get to them. This tends to be especially true with holiday themed books. I’m just not likely to read a Thanksgiving themed book in May or a Christmas themed one in June.

This idea struck me the other day, when I noticed Beth Carpenter’s A gift for Santa on my shelf. Right behind that thought was, “well, it is the Christmas season. If not now, when?”

So, I searched and found three Christmas books and set out to read them all. Again, if not now, when? Later, I came across Take the Donut and, though not obviously Christmassy, the snowman and red, green and white sprinkles led me to think it might be (see cover below). So, I added it in after I’d started the challenge. In the end, I read four books either explicitly centered around the holiday or at least set during the season.

I would call this a mildly successful challenge. None of the books were big winners for me, two of them had disappointingly similar plot lines, and three of them were part of series I’ve not read. Of the four, I’d say A Gift for Santa was the best. It was pretty unoriginal (being one of the two almost identical plot lines) but I think the writing in it was better than the rest.

Having said all that, none of them were flat out bad. Pride and Prejudice and Mistletoe was bottom of the pile, but even it wasn’t so bad I couldn’t finish it.

So, without further ado, here they are, reviews of my impromptu 2017 Christmas Challenge. 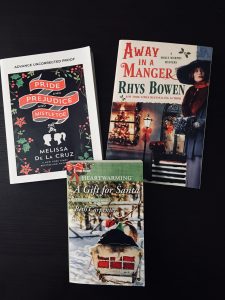 Pride and Prejudice and Mistletoe, by Melissa De La Cruz:

Two days before I started this book, I wrote a review about another book that stated, “There are two romances, where only one is needed. The first progresses only in that they clear up a misunderstanding from high school (one that was very obvious and persisted because they never spoke to one another again, despite being in the same class), but suddenly they’re all marriage and babies…Nope, I’ve neeevvvvveeerrr seen that used in a book before. Nope, it’s not trite and patriarchal. Nope, it doesn’t piss me off every time I see it. Oh wait, yes it does. ” I complained vehemently to my husband about how common and over used this storyline of the small town girl, who made it big in the city, finds herself unfulfilled by what she’s worked her whole life for and eventually returns to her roots only to discovers that all she really wants is a man and a baby.

Then I picked up Pride Prejudice and Mistletoe up and, what do you know, it’s about a small town woman who moved to New York and made millions. Then returned home to Pemberly, Ohio, ran into her high school rival and fell instantly in love, eventually getting what every woman apparently truly wants as a happy ending: marriage and a baby. Like the last book, she had her best friend with her, who constituted a second romance in the book. Also like the last book, it was with the brother of the primary male romantic lead. Like the previous book one of the brothers was a carpenter and came from a lovely family while the main character was estranged from her family.

Sure the details of the two books differ, but they are essentially THE SAME STORY. These books are so similar I considered googling to see if the authors were actually two pen names of the same person. I’ve taken the time to lay this out to say this. I randomly picked these two books up. Both romances, but one a romantic mystery of sorts and one a Christmas themed book. Are there really so few storylines in the Romance genre that authors writing in totally different sub-genres can’t find something new? Do they really have to keep recycling the same old crap over and over, such that it’s unavoidable? *Sigh*

Outside of my frustration of reading the same storyline I’ve read a million times before, I never liked Darcy. I understood the point De La Cruz was making about self-esteem and self-worth, but the woman was just generally horrible. She was 29, but felt like a teenager. Luke was a caricature, as flat as cardboard. The romance was sudden and based on nothing the reader was given to understand. NOTHING. It just appeared out of no where. All the vacillating about Carl made no sense, since she didn’t even seem to like him. And the happily ever after was just tacked on at the end. Plus, the writing just isn’t very good.

The only thing I’ll give this book is that Luke moved to New York, instead of Darcy to Pemberly and she didn’t give up her career. That’s a lot more than most books using this storyline manage. But basically this is exactly the sort of book that convinced me I hated romance books for most of my adult life.

As a side note: There is a four-month-old baby stated to have been born “a year ago.” What’s up with that?

A Gift for Santa, by Beth Carpenter

I’m going to start out by saying this book is fine and it stands alone. I’d not read book one before reading this one and had no problems. The writing is readable and the editing seems fine too.

However, this is the third book I’ve read in a week in which the plot line was about a woman leaving home to pursue a career, then returning home to fall in love with a man from her past, and compromising her career to be a wife and mother. THE THIRD TIME IN A WEEK and I’m not trying to seek out similar books within the romance genre. One was romantic mystery, one a retelling of classic with a Christmas theme, and this one a Harlequin romance. You would think there was enough difference in the sub-genres to allow for differing storylines. Is there really no other plot line available in romance? Really? I will say that of the three, this was probably the best. And if you happen to like this plot line you’ll probably enjoy this book.

Outside of complaints about the apparently very frequently used plot, the characters were likable, the twist a little obvious, and the ending happy (as you would expect). Not bad, just also not original.

Away in a Manger, by Rhys Bowen:

Very sweet, but a little plebeian for my taste. I think it just wasn’t the right book for me. I found Molly too much of a pollyanna and her telling of the events of each day repetitive and unexciting. Further, I thought her solving of the mystery far too dependent on coincidence and luck to be believable and I wasn’t comfortable with some of her ideas on underaged criminals.

But again, that’s just my opinion. For those who like a sweet, uplifting mystery, I’m sure this will be a winner. The writing and editing seem fine and there is an appreciable amount of diversity in the cast (though I think a little of that was compromised by the final disclosure about the villain’s personality). Lastly, this is #15 in a series that I’ve not read, and though events from past books were mentioned, it successfully stands alone.

Take the Donut, by Annie Hansen

Not bad, though I was a bit apathetic about it. I’m not sure if that is a reflection of the book or just the effect of it being number three in a series that I’ve not read book one and two. All in all, I found the writing perfectly readable. Though the author does use names in dialogue too frequently to feel natural. The characters are distinct and mostly likable (though Kelly definitely has her TSTL moments). And the mystery isn’t super obvious. I’d read another Hansen book and that is generally my mark of being good enough.