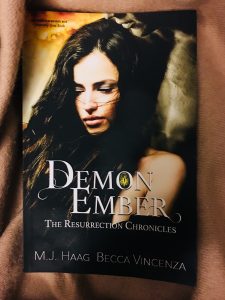 I won a signed copy of Demon Ember, by M.J. Hagg and Becca Vincenza, through Goodreads.

Description:
Mya’s world is falling apart. After a series of earthquakes, deadly animals with glowing red eyes begin attacking people and start the spread of a zombie-like plague. Safety is just a memory as she tries to make her way home. When a different creature attacks the people helping her reach Oklahoma City, Mya is sure she’ll never see the light of another day. Despite his eerie green eyes and very sharp teeth, the grey-skinned creature is more intelligent and humanlike than he first appears. He’s determined to keep Mya by his side and protect her from the new world’s dangers. When his path starts taking her further away from home, she must choose between safety and her family.

Review with a slight spoiler:
Basically entertaining, but not much more. So, Mya decides to cross the zombie and hellhound infested state to get home to her family (without verifying they’ll be there). Along the way she runs into Drav, a large, human-like creature who decides he’s going to protect the female at all costs (without asking if she’s interested in this). That’s the plot…all of it. The book is basically just them running from one place to another and Drove defeating anything that threatens Mya. There really isn’t a lot to it in terms of development or explanations. You are left with a lot of questions in the end (which is a cliffhanger).

Drav can conveniently learn a language by hearing a word once, so the whole communication thing is easily dismissed. And he’s sweet. I liked Drav. Once he could understand her instructions, he was scrupulously attentive to Mya’s demands not to touch her (consent, basically). I liked that. Mya wasn’t particularly adept at survival, but not too stupid to live either. So, I was fine with Mya.

My issue arrises from the fact that he decides to protect her because he’s never seen a female before. There’s nothing inherently special about Mya herself that makes him take interest in her. He’s pretty much just protecting the pussy or womb. He of course falls in love and I imagine Mya will in future books, but when you get right down to it, this isn’t about Mya as a person.

All in all, I enjoyed the book. There were some funny bits. Like the meta scene where the large, fanged, grey-skinned man with pointed ears getting his hands on a Ruby Dixon novel. I’d be more than willing to read the rest of the series.