I borrowed a copy of Annihilation Aria (by Michael R. Underwood) from the local library. 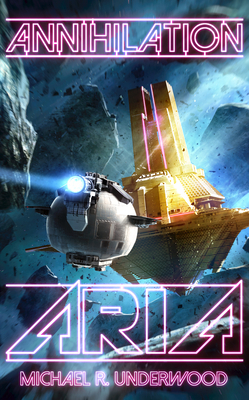 An exuberant space opera that dares us to lose ourselves in battle songs and nonstop action!

A woman who can wield a weapon like a song and her voice like a weapon. A man who can out-think any problem. A pilot who can outmaneuver the best of them. Lahra, Max, and Wheel live and work aboard the Kettle, salvaging artifacts from dangerous galactic ruins to keep scraping by.

But those artifacts can unlock an ancient power which threatens the iron-fisted rule of the galaxy’s imperialist overlords, the Vsenk. To protect their dominion, the Vsenk have humbled entire civilizations. They eat ships like the Kettle and her found family for breakfast.

Lahra, Max, and Wheel are each just trying to get home to the lives they lost, but they’ll have to evade space fascists, kick-start a rebellion, and save the galaxy first to do it.

Board the Kettle for a space opera like none you’ve ever read before; an adventure of galactic subterfuge, ancient alien lore, a secret resistance force, lost civilizations, and giant space turtles.

This is a little rambly, but I have scattered thoughts.

I enjoyed this a lot. I did think the pacing a little inconsistent—it dragged in the middle—and it felt a little like a second book sometimes, because of how much history was referenced between the characters. But overall, I loved spending time with the characters, enjoyed that the two main characters were married and seriously in love (no need to be a romance if the relationship is already established), appreciated the diversity in the alien species, thought there was a ton of witty humor, and several moral quandaries that invited deeper thought.

I also got a personal little amusement after I spent the whole book thinking, “Wow, this has a real Stargate feel to it” (along with anything and everything like Indiana Jones, Tomb Raider,—we had a lara/Lahra after all—Farscape, Star Wars, Firefly, etc, but mostly Stargate)—with the archeologist stepping through a gate and getting lost in space—and then realizing Max was referred to as ‘son of Danielle.’ Close enough to Daniel for me to call it a tribute, right? I’m running with it. It made me happy.

Lastly, as an aside, I recently read several books that I found recommended in a Fantasy Readers’ Forum in which the OP asked for books in which martial women protect nerdier guys. (Totally my jam too, BTW.) Well, this may be Sci-Fi, but it fits the OP’s request better than just about any of the books I saw recommended. (Except maybe His Secret Illuminations). So, if that’s your thing too, pick this book up.

All in all, I don’t know if a second book is planned, but I’d be happy to read it (or more of Underwood’s work) if one is. 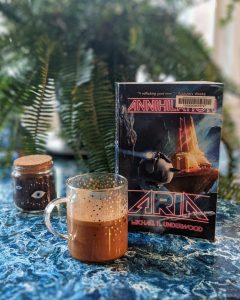