I’m going to be harshly honest here. I’m currently reading a book I’m not particularly enjoying, but am determined to finish. When this is the case, I usually start a second book to alternate. I read a bit of the book I’m chipping away at and then some (or all) of another book, then more of the challenging book, etc. However, as occasionally happens, I’m not particularly liking the secondary book right now either. But I’m not going to let myself start a third! So, I found an excuse to download an audio book instead [semantics, I know]. I borrowed Any Given Doomsday, by Lori Handeland, through Hoopla. 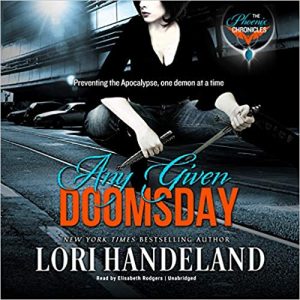 Elizabeth Phoenix once used her unique skills as a psychic to help in the Milwaukee Police Department’s fight against injustice. But when Liz’s foster mother is found viciously murdered–and Liz is discovered unconscious at the scene–her only memory of the crime comes in the form of terrifying dreams … of creatures more horrific than anything Liz has seen in real life. What do these visions mean? And what in the world do they have to do with her former lover, Jimmy Sanducci?

While the police question Jimmy in the murder, Jimmy opens Liz’s eyes to a supernatural war that has raged since the dawn of time in which innocent people are hunted by malevolent beings disguised as humans. Only a chosen few have the ability to fight their evil, and Jimmy believes Liz is among them. Now, with her senses heightened, new feelings are rising within Liz–ones that re-ignite her dangerous attraction to Jimmy. But Jimmy has a secret that will rock Liz to her core … and put the survival of the human race in peril.

I really wanted to like this and I thought, in the beginning, that I would. It started out strong, after all. But, in the end, I wasn’t impressed. The writing is fine. The narrator did a good job. I didn’t notice any editing mishaps. But I found I just didn’t like the book…or really any of the characters outside of Liz (and I barely liked her).

What I disliked was BOTH the men she’s loving. I disliked them on principal. I disliked how they treated her. I disliked her when she was with them. The sex was super rapey…was rape. And the whole plot line is turning itself inside out to show how special she is and how everyone wants her…her special body.

The only thing that really kept me reading was to find out why a man who so obviously loved her desperately would cheat on her (in the past). But that was never addressed, not really or satisfactorily. Plus, she just up and decided to ignore it. This might have been necessary, but I wanted some closure on the issue.

I don’t think I’ll continue with the series, but might not write Handeland off as an author to read.

Edit: I realize this whole post makes me sound really negative. I promise I’m not. LOL 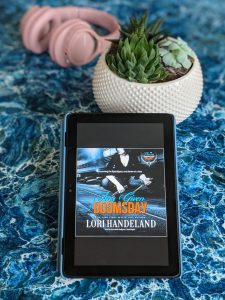 I’m trying this new thing where I link other reviews of books I read, for comparison’s sake. I’m not sure this will be a permanent feature. But here are a few for now.

REVIEW: Any Given Doomsday by Lori Handeland

REVIEW: Any Given Doomsday (Phoenix Chronicles-Volume I) by Lori Handeland

Any Given Doomsday by Lori Handeland

Any Given Doomsday by Lori Handeland