I was initially offered Mel Todd‘s Twisted Luck series for review, but I declined since I’m pretty much off YA books lately and NA books have an about 50/50 chance of feeling very YA (in my experience). There is a very thin line between a late teen and an early 20-year-old, after all. However, after Inherited Luck (book 4 of the series) was promoed on Sadie’s Spotlight. I decided to give the series a shot after all and borrowed and audio version of My Luck (book one) through Hoopla. 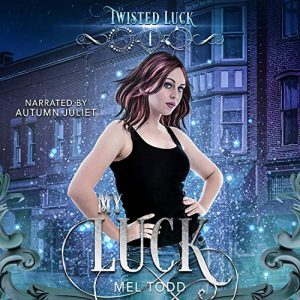 Cori Catastrophe. They call me that sometimes, and I hate to admit it, but it isn’t wrong. Things go weird around me. Electronics die, things break, and if something odd happens, I seem to find it. Finding another dead body just made me late to work.

Nothing will stop me from getting my degree, getting a job, and getting away from this tiny town – though leaving my best friend will hurt more than anything else. Reality seems determined to make reaching my goals impossible. The dead guy had my name in his pocket, my best friend emerges as an archmage, and my parents – well let’s just say leaving them behind is one of the best parts of getting away.

So be it. Not being a mage means I’ll have to struggle to succeed. No matter how weird things get, I’ll make it. I lost my brother and I’ll probably lose my best friend to the world of magic. All I can do is depend on myself.

This might be a little spoilery. I don’t think I say anything that you wouldn’t guess from the blurb, but be warned.  Plus, I make a few assumptions. But I’m fairly confident in my assertions.

I am struggling to figure out how to describe my experience with this book. The writing is perfectly readable. I listened to an audio version, so I can’t comment on editing, but I didn’t catch any obvious mishaps. So, the book isn’t a mess. But it’s 359 pages long and literally moves the plot forward zero percent. The character is in the exact same position (in the larger plot) at the end of the book as she was in the beginning. We follow all her personal dramas and accomplishments, from class to internships to work, but not the VERY OBVIOUS magical issue that is the larger plot and mystery. Cori hasn’t really even acknowledged that there is a mystery, not really! And these are my biggest issues, lack of plot progression and the obviousness.

There is a really interesting magical world here, complete with bureaucracy and international standards. What is happening around Cori is VERY OBVIOUSLY not normal. Her own reluctance to acknowledge this is hard to believe, even when she has her emotional outburst about it. But that everyone around her, several of whom basically tell her to her face she’s magical and almost all of whom suggest she get tested for magic, also just ignore this is beyond the pale. She is surrounded by mandated reporters, people who are legally obligated to report unregistered magic (and child abuse/neglect, but that’s another issue). That not one of them called and reported her, forcing her to get tested, is 100% not believable.

So, the whole premise of the book, that she doesn’t know she has magic, is unsteady and compromises the whole thing. In fact, I’m stating here she has magic, but even by the end of the book neither she nor anyone around her has acknowledged it. It got to the point that I literally rolled my eyes every-time something obvious happened, another person said, “get tested,” and Cori responded with I’m not magic, end of story.

I’m actually interested in knowing what happens. But I’m not willing to commit to reading another book knowing that the author is willing to dragggggggg the plot out as long as she has. Will I read the next book  only to find Cori and everyone around her with their head STILL in the sand? That would be too frustrating to handle. I almost can’t handle this book ending with them still sucking soil.

So, as I said, I’m struggling. I don’t think the writing is bad. I like the world. But this 359 page book functions as little more than a prequel to the series and that’s a structural decision I’m not wiling to submit myself to further.

As for the narration, it started out pretty rough, honestly. But Juliet eventually seemed to find her stride and it smoothed out. 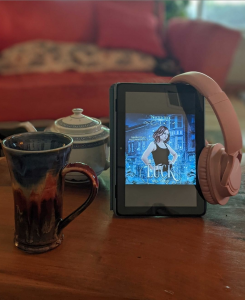 I’m trying this new thing where I link other reviews of books for comparison’s sake.

My Luck by Mel Todd – A Book Review