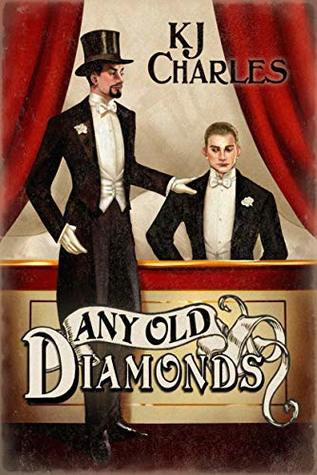 I purchased a copy of Any Old Diamonds, by KJ Charles last October but never got around to reading it. Then, later, bought an Audible copy, which I listened to.

Lord Alexander Pyne-ffoulkes is the younger son of the Duke of Ilvar, with a bitter grudge against his wealthy father. The Duke intends to give his Duchess a priceless diamond parure on their wedding anniversary—so Alec hires a pair of jewel thieves to steal it.

The Duke’s remote castle is a difficult target, and Alec needs a way to get the thieves in. Soldier-turned-criminal Jerry Crozier has the answer: he’ll pose as a Society gentleman and become Alec’s new best friend.

But Jerry is a dangerous man: controlling, remote, and devastating. He effortlessly teases out the lonely young nobleman’s most secret desires, and soon he’s got Alec in his bed—and the palm of his hand.

Or maybe not. Because as the plot thickens, betrayals, secrets, new loves, and old evils come to light. Now the jewel thief and the aristocrat must keep up the pretence, find their way through a maze of privilege and deceit, and confront the truth of what’s between them…all without getting caught.

It took me a while to get into this book, but I eventually did and enjoyed it. I very much appreciated the way both men tried to be good to the other and the way Jerry insisted on clear boundaries and obeyed them. They were definitely perfectly matched in desires. However, I also thought there was a tad too much sex, it cluttered the plot. (It was hot though.)

The close bonds outside of the main pairing were also appreciable—Jerry and Lane, Lazarus, the siblings. There were tons of platonic relationships and connections and I thought it enriched the story. Plus, it was fun to get an indirect peek at some of the characters from another Charles book!

All in all, I wouldn’t call it my favorite Charles book, but as always I enjoyed reading it…or listening. Cornell Collins did a fabulous job with the narration.