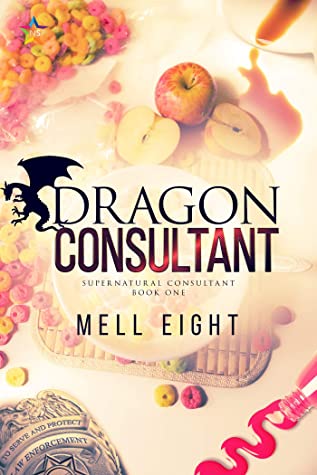 Last month, I won a $10 gift card from Nine Star Press. I chose to buy the first few books in Mell Eight‘s Supernatural Consultant series. I started with Dragon Consultant.

The FAA has been struggling with dragons attacking their planes, and hire Dane, a supernatural consultant, to look into the matter. What Dane finds in the woods is not quite the problem he expected: a group of dragon kits and their sick father.

When he learns the real reason the family was in the woods, his case only grows more dangerous, and while Dane is plenty experienced at watching his own back, taking care of baby dragons and their handsome, distracting father almost makes danger look easy

This was very sweet, however, it’s also very shallow with very little in terms of world-building or character and relationship development. The first time one of the characters mentioned wanting the other romantically and thinking perhaps the sentiment was returned, I literally looked around and said, “where did that come from?” They’d barely even spoken. The same is true for characterization. There basically isn’t any. Why does Mercury seem immune to the territorial urges of the rest of the dragons? How is Dane what he is (redacted to avoid a spoiler)? I don’t know, and I don’t know a lot more than I do, even having finished the book.

The kits are adorable and the characters are likable. Plus, I really appreciate that there is very little angst. Both characters say what they mean and the author doesn’t force them to be oblivious to the obvious to drag out the plot. I have the rest of the series, and I’ll finish it, but this was only a middle-of-the-road read for me.