I picked up a compilation of the first three books and a bonus short story in Margo Bond Collins‘ Khanavai Warrior Bride Games series as an Amazon freebie. Here I’m only reviewing the first one, Entered in the Alien Bride Lottery and the Christmas short Christmas for the Alien Bride Lottery. I ended up reading this now because the short qualified for my 2022 Winter Reading Challenge. 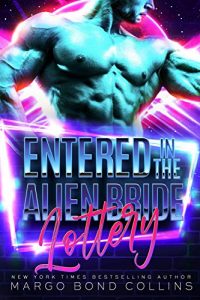 There are a million ways to end up in the Alien Bride Lottery. But it takes only one.

Every unmarried female human over the age of 21 gets entered once a year. You can also accept extra entries for legal infractions—instead of paying a parking fine, for example, you can request an extra entry. Lots of women do that. I mean, why not? The chances are astronomical that your name will get chosen to be one of the hundred or so women who get shipped off to space every year.

And even if your name is drawn, the odds are slim that you’ll match up with an alien who’s looking for a mate.

Most of the lottery-drawn women come back to Earth every year and resume their lives as if nothing changed.

And no matter what, getting drawn in the Lottery means you have to compete in the Bride Games.

I only hope I can avoid catching the eye of one of the giant, rainbow-hued brutes whose mission is to protect Earth—and who can claim me as a mate.

All because I was Entered in the Alien Bride Lottery…

I have and read this as part of the The Alien Bride Lottery Volume 1: The Khanavai Warriors Alien Bride Games Books 1-3. However, I do not think I’ll read any more than this first story.

I generally like the Mars Needs Women trope, in a cheesy sci-fi sort of way. And I’ve read Margo Bond Collins books before. They’re usually fluffy, silly fun; nothing deep but enjoyable. And this book was competently written. However, I did not like it. Partly because I didn’t like what Collins did with the story and partly because there wasn’t enough development that I could come to accept what Collins did with the story.

Here’s the thing. It’s not at all uncommon that the women in a Mars Needs Women trope get taken from their life on Earth to live among the aliens. That’s kind of the whole shtick. And some authors pull it off well enough that it isn’t quite as rage-inducing as it can be. And some author make a hash of it, such that you can’t ever come around to forgiving the alien for what they did to her. And some, like Collins here, do something even worse, in my opinion. They make their female character decide they want to give it all up to go pop out babies for their alien husbands. And, in order for this to be worth a plot, the woman has to have something to be giving up. it doesn’t work if she has no life to speak of.

And this is what I didn’t and don’t like. Collins gives us a woman who is in university, has goals, dreams, and a life plan. And then she very quickly decides to give it all up to run off and play broodmare to an alien. But the underlying message is the same old patriarchal claptrap women are always subtly fed. Those goals of education and a meaningful career aren’t really women’s true purpose, being a wife and mother is her proper role. And this is reinforced in these stories by how quickly the female characters see the the error of their ways, see how much better life would be as a wife and mother instead educated or with a career and course correct, by giving up their own hard earned lives to play second fiddle to a man.

No matter how you restructure the plot in various books, this is the moral of a lot of romance stories and it crops up frequently in the Mars Needs Woman trope. The trick for the author is to make it not so blatant that women (like myself) who value education and a career don’t feel slapped in the face for our “wrong choices.” *Insert eye-roll.* Collins failed in this.

[Spoiler ahead] She tried, I’ll give her that. The H is lovely and wanted to find a way for the h to accomplish her goals. And they did find a way for her to finish her degree as a distance student, which is more than some authors offer their female characters. But what good would that really be on an alien planet? And in the end it doesn’t negate the fact that we were given a female character who has to choose between the educational goals she set for herself and has worked 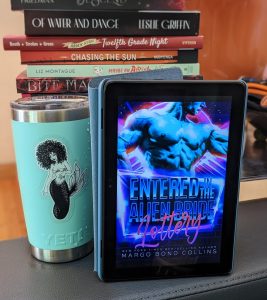 hard for and a man. Then, without a second thought, tossed her own goals aside to take up the mantle of support to a male. (The finishing of the degree did not come up until after she’d made this choice.)

*Yawn.* Yawn because it’s been written a million times before in support of patriarchal norms and yawn because it required exactly zero creativity. Collins seems to have made exactly zero effort to give us anything new and interesting.

So, I think I’m done with this series.

I also read the short story Christmas for the Alien Bride Lottery. (It was included as a bonus with the compilation). It was barely anything at all. Another girls gets called up for the lottery, immediately decides she likes the look of one particular alien (who has also decided she’s his mate), they have a brief holiday experience, and a fairly bland sexual encounter and wham, bam, thank you ma’am, and live happily ever after. I wasn’t impressed. But I do think even this condensed version was was less rage-inducing that book one of the series. I felt like this heroine didn’t have a lot going on earth-side, looked at her options, and decided going with the alien worked for her. She didn’t throw away all her plans and hard work for it though. Plus, she was the initiator for a lot of the story.