I borrowed an audio  copy of R.A. Steffan‘s Forsaken Fae through Hoopla. 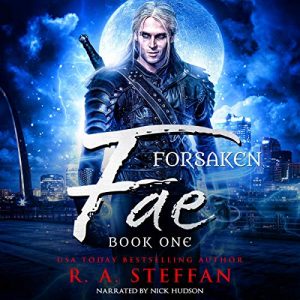 There’s an unconscious Fae drooling on Len’s couch.
That’s not even the weirdest thing to happen to him this week.

Len’s been told that not all Fae are scheming, manipulative pricks. A moot point, since this one definitely is—he knows that much from bitter experience.

So, when his vampire ex-coworker dumps Albigard of the Unseelie on Len’s doorstep, he gives her two hours to find a better hiding place for the Fae fugitive before tossing him straight to the curb with the rest of the garbage.

He should have known better, of course. Because if there’s one thing Len’s learned since being thrown into the deep end of the seedy paranormal underworld, it’s that nothing is ever so simple.

Now he’s on the run from a cataclysmic primal force trying to tear its way into the human realm, stuck with a charismatic bastard who already knows way too much about the inside of Len’s messed-up head. The first time he met Albigard, Len punched the Fae in his too-perfect face. This time, they’ll have to learn to work together—or risk having their souls torn apart and consigned to the void, with the rest of humanity facing the same fate soon after.

The Wild Hunt has slipped its chains.
Darkness is coming for the world.

Do you want to know what my BIGGEST reading pet peeve is? I’ve mentioned it before. It’s when a book is labeled as book one, so I pick it up to read it, and then discover that that is a lie. Maybe there’s a prequel, more often the book turns out to be a spin-off of another series that doesn’t really stand alone. This pisses me off so bad! And that’s exactly what I encountered here, with Forsaken Fae. It very clearly is labeled as book one.

(On Audible, Hoopla, Amazon and Goodreads…pretty much everywhere). As far as I’m concerned, that should make it safe to pick up and read. But within two chapters of starting the book I put it down and went hunting, already suspecting “book one” was a lie. There was no evidence of intended world building, character growth, or even introduction. The book did not read like a first book. What I discovered was this:

Forsaken Fae is a slow-burn M/M urban fantasy trilogy. It’s set in the same world as the bestselling series The Last Vampire and its other spinoff, Vampire Bound.

Does that make it a spin-off of a spin-off or just a second spin-off of a larger series? Either way what it 100% does not make it is something that can be picked up and read alone as a first book in a series. I am stating this right now. This cannot be read and enjoyed without reading previous books! The Last Vampire appears to be 6 books and a prequel and Vampire Bound 4 books. That’s a potential 11 books that need to be read before this. But even if you don’t need to read all the series, at least you need to find the ones that precede the events of this book. It is nothing more than authorial conceit to label this book as book one of anything and infer that readers could start here.

Further, the book ends on a cliffhanger with nothing concluded. So, it can’t be read and enjoyed without the books following it either. I’m seriously pissed off at the waste of my time. The only reason I chose to finish it is that it was set in Saint Louis, where I live, so I’d hoped to see my city well represented. It’s nothing but a name though, you don’t feel the setting at all.

The writing is fine. I thought I might have liked the characters if I’d been given a chance to get to know them (which I wasn’t), and the narrator did an OK job. I hated his voicing of the cat sidhe, but all else was passable. I might have a wholly different review to write if I’d come to this series without being tricked into picking it up in the middle. But that’s not what happened. So I  have no desire to read more of this author’s work. I feel pretty burned. 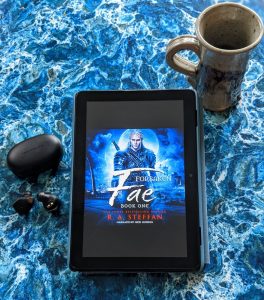