Last week, I suddenly remembered that you can buy signed copies of books from authors on Etsy. So, I purchased several. Mint Freeze, by Laurel Chase was one of them. 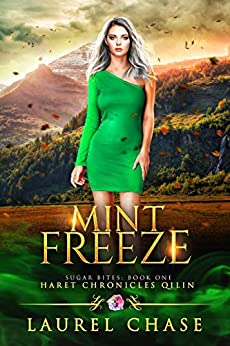 Talk about rags to riches. Cinderella had nothing on me.

I have a sparkly new crown, a remodeled ancient castle, and I’m mated to six of the most delectable princes a girl could conjure.

But my happily-ever-after honeymoon still seems a long way off.

There are plenty of magical creatures in Haret and Earth who would kill to see me dethroned – literally – and we can’t let our guard down yet.

Still, my men promised me a break and a bucket list, and my mates always deliver their goods. We’ll just have to get our sugar in small bites.

I’m Carlyle Licorne, and I’m ready for my next sugar fix.

The Sugar Bites series features Carlyle and her six men, navigating the new Haret as only she can do – with snark, sugar, and shanking.

I am just infuriated. I can’t even tell you if this was a good book or not because I’m so distracted by, yet again, picking up a book labeled book one and finding out that THAT IS A LIE. I have complained about this before. Hell, I wrote a blog post way back in 2016 complaining about this very thing.

I started this book and very quickly sensed that I’d been dropped into a story. Characters appeared without introductions. There was no world-building or even descriptions, places were named but nothing else. And the plot was 100% based on events that apparently happened in the past, outside of this book (one presumes the previous series).

So, a quick Goodread search provided me two pieces of information. I was reminded that the blurb says,

And that the The Haret Chronicles is a 7 book series. And since I’m deeming the above statement untrue, that makes Mint Freeze book number 8, no matter what the cover and blurb say. Because even at page 107/130 (82% into the book) I came across quotes like this,

My heart gave a lurch. I knew it. God, did I know it. I lost sleep over the pressure of what I was supposed to be able to do, and the fear that I wouldn’t be enough.

But, if you’ve not read the previous books (like I haven’t, trusting that ‘book one’ on the cover) you have no idea what they were doing or what she was supposed to able to do.

The book is entirely like this. I could have chosen a hundred other quotes. I chose that one because it’s so late in the book and illustrates the point that the reader is never given the information missing from the previous series and it’s pertinent to understanding this book. YOU CANNOT READ THIS AS A COMPLETE WORK.

You, in fact, can’t read these books before The Haret Chronicles, as the blurb claims, and feel as if you’ve been given any sort of satisfying story. Period. I literally just spent 130 pages with characters I didn’t care about—since the reader is apparently expected to already know and care about the characters, that opportunity isn’t given here—chasing a plot I knew nothing about, in order to…yeah, I got nothing. I don’t even know what the end goal was. Plus, it’s a cliffie on top of everything else. I mean, I read the book. But I feel nothing but frustration having done so. And I can’t imagine that was the author’s intention.

What’s more, over half of this novella appears to just be pulled directly from past books and fed to the reader as memories. So, I don’t even think this is a new story. Having not read The Haret Chronicles, I can’t know if it’s literally a cut and paste (from previous books) job or if it’s freshly written. But it felt like a cut and paste job.

So, if you’ve read The Haret Chronicles, this is probably a fun little addendum and you’re experience with Mint Freeze was probably completely different than mine. I can see what role the ‘sugar bites’ are supposed to play, after all. If you haven’t read The Haret Chronicles, don’t believe the lie that you can read this first. Put this book down and go start at the beginning.

The writing seems fine. The three characters included here (Carlyle and two of six of her mates) seem likeable enough. The sex scenes were fine. I might have liked the series if I hadn’t unknowingly started it at book 8.