I purchased a paperback copy of Nightwalker, by A. J. Llewellyn. 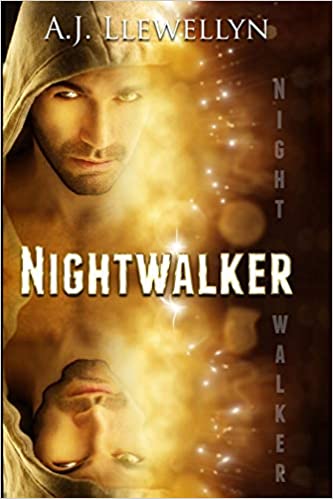 In Los Angeles, Lauro is a working psychic with a secret…he is a Nightwalker, a man with an ability that allows his spirit to roam the streets late at night in search of people who need help and healing. Descended from the ancient, persecuted Benandanti that worked in Northern Italy, and born with the caul covering his face, Lauro learned the legends of his birthright from his mother.

Now, when a hot young model, Alex, comes to him for a reading, Lauro is torn by grief at being unable to see nothing ahead for the man. Confiding his concerns to his lover, LAPD detective Madrigal, Lauro fears for Alex’s safety.

But Lauro soon learns his client gave him a false name. And he now knows his recurring dream is real. Alex has been kidnapped, and somewhere in his nightly “walks,” Lauro comes into contact with the man’s abductor, a frightening and evil man who will stop at nothing to kill his prey. As Lauro gets closer to the truth, he starts to experience long-dormant memories of his centuries-old life, terrified that what befell him during the Roman Inquisition is a horrific prophecy of the future…

I found this surprisingly enjoyable for something so short. Usually I dislike ‘books’ shorter than a hundred or so pages because they don’t manage to tell a whole story. But here, I felt Llewellyn managed it. Could it have been expanded into a full novel-length book? Sure, I feel like the plot could have been stretched and beefed up to fit (and I’d have probably liked it more, just because I like longer stories) but it doesn’t feel lacking as is, just different.

I liked Lauros and his integrity. I liked Madrigal and his struggles to accept and not feel inadequate in the face of Lauros’ abilities. I liked the mother. But I felt like the book gave unnecessary detail at times, causing the plot to drag a bit. And I oddly felt the explicit sex gratuitous. I say odd because I generally like me some down and dirty time. But in a piece so short, I think the page count dedicated to several detailed sex scenes felt out of proportion to the whole.

All in all, however, I enjoyed the writing and will happily pick up another of Llewellyn’s books.