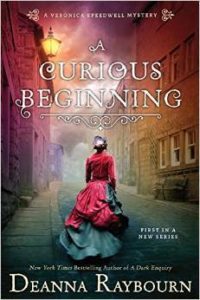 I borrowed Deanna Raybourn‘s A Curious Beginning from my local library.

Description from Goodreads:
London, 1887. As the city prepares to celebrate Queen Victoria’s golden jubilee, Veronica Speedwell is marking a milestone of her own. After burying her spinster aunt, the orphaned Veronica is free to resume her world travels in pursuit of scientific inquiry—and the occasional romantic dalliance. As familiar with hunting butterflies as she is fending off admirers, Veronica wields her butterfly net and a sharpened hatpin with equal aplomb, and with her last connection to England now gone, she intends to embark upon the journey of a lifetime.

But fate has other plans, as Veronica discovers when she thwarts her own abduction with the help of an enigmatic German baron with ties to her mysterious past. Promising to reveal in time what he knows of the plot against her, the baron offers her temporary sanctuary in the care of his friend Stoker—a reclusive natural historian as intriguing as he is bad-tempered. But before the baron can deliver on his tantalizing vow to reveal the secrets he has concealed for decades, he is found murdered. Suddenly Veronica and Stoker are forced to go on the run from an elusive assailant, wary partners in search of the villainous truth.

Review:
A Curious Beginning is a bit like a non-paranormal Parasol Protectorate, except that Veronica Speedwell is no Alexia Tarabotti. I found her nowhere near as approachable. Frankly, I found Veronica emotionless and over the top in her forwardness. What’s more, I was excessively put off by how anachronistic her whole personality was. She held very modern ideals and went about behaving in a very free and modern way that I find hard to believe would even have been possible for a woman in 1887.

I appreciate that she was Sherlock Holmes smart and I did find her and the book in general amusing, but the whole thing just never really peaked for me. The entire read was just sort of a middle of the road, never bored, but never engrossed kind of middling experience. It felt like a copy of something else, I’m afraid, with some of the spark lost in the translation.

None of this was helped by the fact that book starts strong, with a break-in, adventure and murder, then the main characters run about doing little of importance for most of the book and the plot doesn’t come back around to anything pertinent until the end.

I didn’t dislike it and the writing is pretty good. I’ll likely read the next one, but I wasn’t blown away either.