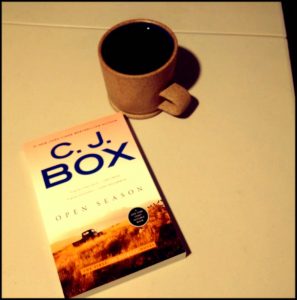 I won a copy of Open Season, by C. J. Box through Goodreads. You guys, I’ve been so lucky in the winning department lately!

Description:
Joe Pickett is the new game warden in Twelve Sleep, Wyoming, a town where nearly everyone hunts and the game warden–especially one like Joe who won’t take bribes or look the other way–is far from popular. When he finds a local hunting outfitter dead, splayed out on the woodpile behind his state-owned home, he takes it personally. There had to be a reason that the outfitter, with whom he’s had run-ins before, chose his backyard, his woodpile to die in. Even after the “outfitter murders,” as they have been dubbed by the local press after the discovery of the two more bodies, are solved, Joe continues to investigate, uneasy with the easy explanation offered by the local police.As Joe digs deeper into the murders, he soon discovers that the outfitter brought more than death to his backdoor: he brought Joe an endangered species, thought to be extinct, which is now living in his woodpile. But if word of the existence of this endangered species gets out, it will destroy any chance of InterWest, a multi-national natural gas company, building an oil pipeline that would bring the company billions of dollars across Wyoming, through the mountains and forests of Twelve Sleep. The closer Joe comes to the truth behind the outfitter murders, the endangered species and InterWest, the closer he comes to losing everything he holds dear.

Review:
This is by no means a perfect book. There are a few helpful coincidences and I thought Box’s use of male philandering and suggestions of sexual predation to emphasize who is good and who is bad was clumsy to say the least. It wouldn’t pass the bechdel test unless you count the children, and the seven-year-old is maybe just a little too smart to be realistic. But I simply enjoyed Joe Pickett and his family.

This is not a new book, first published in 2001. And maybe 15 years ago the alpha male trope wasn’t as popular as it is now, but it’s so refreshing to encounter a male main character, who has a fairly über manly job but isn’t an alpha jerk. Joe considers his family his anchor. He adores his wife and kids. He cooks pancakes in his bathrobe and isn’t bothered that his quite, considered manner makes him come across as slow at times. He’s the guy that always does the right thing, even when it’s hard and everyone around him is telling him not to bother. I just really liked him.

I also thought, with #NoDAPL (the protests against the building of an oil pipeline under the Missouri River) in the media, the plot here was quite timely. The writing was lovely and I think it prompted some interesting discussion on The Endangered Species Act.

For those who pick up this new edition, read the introduction after the book. Box discusses how he chose certain aspects of the plot and it provides enough clues that it kind of gave away some things for me. If in no other way, by telling me what was important enough to pay attention to, instead of it coming to light in the course of the narrative.

All in all, however, a win for me.

What I’m drinking: Decaf coffee with a shot of whiskey in it. What? It was nine at night, I can’t be drinking caffeine that late anymore. It didn’t used to keep me up, but it sure does not. And the whiskey? It was not long after the presidential elections. I needed that shot!