I received a paperback copy of A Tracker’s Tale, by Karen Avizur in the mail. 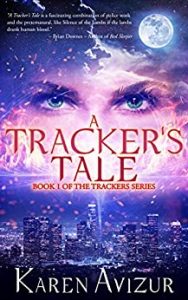 In Katherine’s world, werewolves, vampires, púcas, and other parasapien species – forced for centuries by human fear and prejudice to live at the fringes of society – have finally come out of hiding to demand their rightful place alongside us. It’s a fragile co-existence, fraught with mutual distrust: a new social contract for which the rules are still evolving. And when those rules break down – usually when a parasapien begins preying on humans – that’s when the Trackers step in. It’s their job to hunt them down and stop them by any means necessary.

Within this elite unit, Katherine Colebrook is one of the best. Her psychic abilities made her a natural for the Trackers Division, allowing her to move between the parasapien and human worlds in ways that no other agent could. But Katherine’s calling hasn’t come without struggle and losses along the way. As a single mother, she must contend with her teenage daughter, Alexandra, who not only shares Katherine’s psychic abilities, but seems determined to follow the same dangerous path as her mother.

And so, when Katherine’s latest assignment threatens to bring that danger too close home, she finds herself faced with the toughest challenge of her career: Can she protect her daughter’s life, while battling a ruthless adversary who’ll stop at nothing to destroy her?

Generally enjoyable, if a little unfocused. I liked this. I appreciated the older heroine, the platonic male/female friendship, the bit of diversity in the cast, and the familial relationship. The writing was readable, though the editing could have done with another pass. I only had two real issues with it were. One, Katherine was a little too trigger happy and remorseless after killing. Two, the book is basically just a few weeks in the life of the main character and the random cases that come her way. That meant that it didn’t feel real cohesive and new characters were being introduced (and old ones disappearing) right up to the last page. Having said that, I’d happily read more of the series.