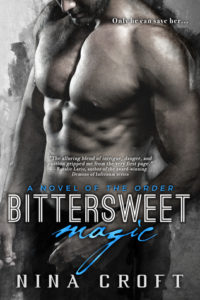 I won a copy of Nina Croft‘s Bittersweet Magic through Fresh Fiction.

Description from Goodreads:
Five hundred years ago, to avoid being burned at the stake, Rosamund Fairfax made a deal with a demon. Thirteen tasks in exchange for her life. Now, the debt is nearly paid. Only one final task and she’s free. The mission: find a key hidden inside a convent. Roz is going undercover!

For Piers Lamont, vampire and head of the Order of the Shadow Accords, bad news comes in the form of a sexy nun, a missing key and an old mistress who wants him back. That his ex-mistress also happens to be a demon intent on taking over the world and subjugating mankind, just makes things that bit more interesting.

For five centuries, Roz has had one aim in life—her own survival. That’s about to change. She has always known there are things were living for, now she’s going to discover that there are also things worth dying for; friendship, humanity and maybe even… love.

Review:
Ok look, this review will be a bit spoilery and it is going to be ranty because I am raging inside. This book made me so angry I almost couldn’t finish it. I’ll say upfront, the plotting is a bit rushed, but the writing is fine. I have no problem with the quality of the writing or editing. What I have a problem with is the asshole, raping ‘hero’ and love based on nothing at all.

Some will argue that there was no penis/vagina penetration, so there was no rape. But the man TWICE brought her to orgasim without her consent, in a situation when she couldn’t refuse, and then thought he wiped her memory of it so she wouldn’t even know. That’s fucking sexual assault and how dare anyone, Nina Croft I’m talking to you, pass that off as the basis for fucking love!

Now, let’s talk about that love, yeah? He’s a smug, sexually harassing asshat to her from the moment they meet. Then she’s panting and all but begging him to take her while thinking about how she couldn’t control her body. Sorry, show women at least enough respect to presume we can control ourselves like adults. And what was she attracted to? What? He was not appealing. And somehow, despite his frankly revolting attitude they fall in love. I felt no chemistry, even outside of how horrid he was. The love was ridiculous and completely unbelievable. It was also morally objectionable, need I remind you of the lack of consent, but we’ll set that aside.

I was seriously angry about the H/h relations in this book. But I also have to complain about the twist at the end of the book that was beyond the pale. As if the baddy would give up all her hard earned plans for that. Again, give women a little respect and show them to have at least one ambition beyond a freakin’ godly dicking! And the too stupid to live, i’m gonna run off to the rescue with no plan and then have a miraculous deus ex machina save at the last second? Please, get outta here with that crap.

I won this book and I always appreciate a free read. But I wish I hadn’t. i wish it had gone to someone who would have liked it more…or at least been less enraged by it.