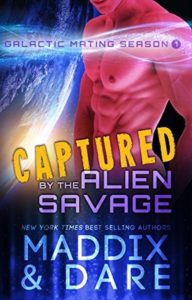 Captured by the Alien Savage, by Marina Maddix & Flora Dare was a freebie on Amazon. I’ve had it for a couple months, but I picked it up and it read now because I recently noticed that all the alien romances seem to feature blue aliens. On a lark I did a quick google search and came up with more than 50 of them. I even wrote a half joking blog post about it. I ended that post with the question, “…where’s my chartreuse alien, or mauve, or red?” Well, given that two days later I happened across a, I kid you not, pink alien romance in my TBR, I had to read it.

Description from Goodreads:
Just when I think nothing else could go wrong…I see her.

My crew and I are on a desperate mission hunting a villain, but he’s always one step ahead. Now we’re stuck in orbit over a primitive planet called ‘Earth’ without enough fuel to get us home. And worst of all, every last one of us is about to go into heat.

Our only hope of survival lies somewhere on the surface. I can’t afford any distractions, least of all a beautiful, curvy human female who my body tells me is my fated mate, my amavar. But that’s impossible! My mate can’t be human… can she?

Review:
I think…no, I’m fairly sure that this MUST be parody. And as parody it’s pretty good. It’s hilarious even. I mean he’s a hot pink (occasionally flushing to purple) alien stud who features a penis, with a retractable carapace, that when unleashed swells in the middle, vibrates AND GYRATES. He can even use it as a homing device to find his mate, literally being let by his cock. They fuel their ship on diet coke and have to return home quickly or they’ll all go into a mating frenzy and kill each other. It’s like all the normal alien erotica tropes on steroids. As parody I call it a success. If someone wrote this to be serious….um, sorry.

2 thoughts on “Captured by the Alien Savage, by Marina Maddix & Flora Dare”