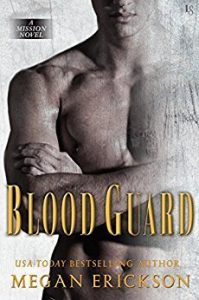 I received a copy of Blood Guard, by Megan Erickson, through Netgalley.

Description from Goodreads:
Tendra: One minute, I’m a bartender in gritty Mission City; the next, I’m whisked away by a vampire named Athan who tells me that I’m the lifeblood of his clan. It sounds unbelievable, but he’s got evidence I can’t deny. Turns out, Athan belongs to an underground society of vampires who feed only on humans with their consent. Their enemies have no such qualms, and they want me dead. The only thing standing in their way is strong, sexy Athan. And the closer we get, the more tempted I am to let Athan feed. . . .

Athan: How could I have known when I snatched this snarky, beautiful human off the streets that she would change mydestiny? As a loyal soldier, I must deliver Tendra to our future king—my brother. Empowered with the blood of ten generations of the Gregorie breed, she is fated to rule as our queen. But there’s something between us that’s so intoxicating, so carnal, I can’t help wanting Tendra for myself . . . even if it’s treason.

Review:
Sooo, I was not impressed. I swear I’ve read this book before. I’m not throwing out the big P word or anything. Good lord, nothing like that! But it just felt like a common plot, with a pretty common heroine and a fairly common hero and noting about it felt particularly new or fleshed out. When you really boil it down, this was a bog standard paranormal romance with nothing (good or bad) to make it stand out in any way.

What’s more it was about as subtle as a sledge hammer. Nothing had enough time to develop or for me to become invested in it. The book isn’t bad. It’s just not overly good either. But for a quick, you’ll-know-exactly-what-to-expect kind of read it’ll fill the bill.

1 thought on “Review of Blood Guard (Mission #1), by Megan Erickson”