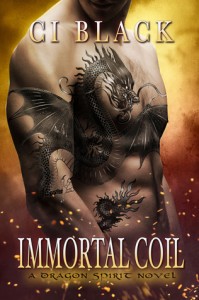 I grabbed Immortal Coil off of the KDP list. (Now it’s time to return to my official review list, break is over).

Description from Goodreads:
Two souls. One Body. Sharing is not an option…

Terrible news has turned Anaea Salis’s life upside down. There’s nothing she can do to make it right and the stranger who stops to talk to her can’t help. But when that stranger, Hunter, an ancient dragon spirit, is viciously attacked and forced to transfer his spirit into her body, Anaea’s life takes a new terrifying twist.

Hunter should have known by now not to get involved with human affairs, but there was something about the woman that drew him to her and he just couldn’t help himself. Trapped in her body all he wants is to get out, except whoever is trying to kill him is now after her.

Their only hope of survival… plunge into the deadly world of dragons.

Anaea’s life is in the gutter and she sees no hope of it looking up, until an unfortunate encounter with a good-Samaritan named Hunter turns everything on its head. Both characters, Anaea and Hunter, are easy to engage with. I got a little tired of Anaea’s self-deprivation, but understood it too. Her strength of will, even in her beaten down state, was something I appreciated. Though I did think that her willingness to put herself in danger in order to establish her independence bordered on the stupid at times. I tend to want to slap such females. Luckily her who personality wasn’t based on this characteristic so it wasn’t overwhelming. Hunter was smoke’ hot, no matter his guise, but I never could figure out why he wanted so badly to protect Anaea in the beginning. It seemed out of character for him, or at least like something the man he had been wouldn’t have concerned himself with. I can’t forget good old Grey. He was a joy. I can see a sequel based on his character easily.

I really liked the feel of this book. I know that is nondescript. It probably comes down to the language choice as much as the actual events. The end result was a certain appealing tone. My favourite parts, however, were when Hunter’s dragon nature slipped through (the tendency to hoard things, the desire to woo a female with shinies and meat, etc). It tended to draw a mental ‘Aww’ out of me. It’s so appealing to see a strong man reduced to acting cute.

I’m did see the solution to Hunter’s body problem coming a mile away, but that doesn’t mean that I didn’t appreciate the sad, poetic justice of it. I also wasn’t particularly surprised by the actual reveal that brought around the conclusion at the end. (I’m trying not to give anything away here.) It didn’t happen the way I thought it would though, so I still got a surprise. Over all I’m glad to have read it and will be well up for reading the second when it comes out.