Some time ago I picked up a copy of Haunted, by Irene Preston and Liv Rancourt, from Amazon as a freebie. I honestly meant to read it ages ago, but somehow it ended up buried in the TBR. But when the authors sent me a copy of Harrowed for review, I got the opportunity to read them together. 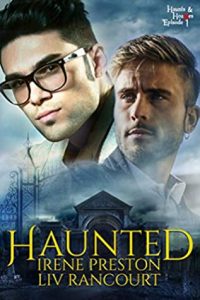 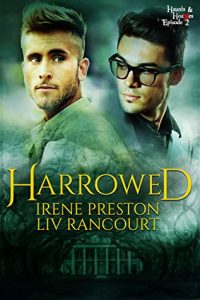 Description of Haunted:
Noel Chandler had a good reason for leaving the L.A.P.D. for New Orleans, but when he walks into a burned out Garden District mansion, he discovers there are some things he can’t outrun. The spooks can find him anywhere.

As the resident historian for the cable show Haunts and Hoaxes, Professor Adam Morales keeps an open mind about the supernatural. Or that’s what he tells himself, until he meets a man who puts that principle to the test. Noel’s smart, sexy, and has killer cop instincts. One glance from his bedroom eyes has Adam ready to believe anything.

But is Noel haunted, crazy, or just another hoax?

Review:
I enjoyed this. I liked the characters and the setting. Plus, having read the Hours of Night series, it was fun to see what was happening around the events of those books. I did think the ‘romance’ progressed a little too quickly and I didn’t feel the ending was particularly satisfying. It felt like a preamble to something else, which I suppose it is. I’m really glad to have held off and gotten to read this together with the longer book, Harrowed. But the writing is excellent and I can’t wait for more.

Description Harrowed:
There’s nothing scarier than the truth…

Noel’s got issues. Like, he doesn’t know what to call his lover. Are they boyfriends? A fling that got out of control? Something more? Even worse, he may sometimes get waylaid by a random ghost or two.

Or else he’s losing his mind.

Now Adam? He’s stable and solid and warm; the kind of guy Noel never knew he wanted. He’s also the historian on Haunts and Hoaxes, which gives him a professional interest in Noel’s “special talent”.

When the ghosthunting crew turns up something weirder than normal at a Louisiana plantation, Adam convinces Noel to check it out. Instead of finding a haunt, they uncover a mystery. Noel used to be a cop and he grabs the chance to investigate something real. DNA is evidence. No matter what Adam says, the ghosts don’t prove anything.

But the past is done hiding and the spirits are going to have their say. Noel better figure out how to listen, because Adam’s job, their relationship, and even his sanity are at risk.

Review:
As much as I liked Haunted, I liked Harrowed more. Being a full-length novel gives it the heft I appreciate. It also gave me two complicated, flawed heroes trying to make the most of a difficult situation. I’ll admit that I got frustrated with Noel’s unwillingness to face or speak about his experiences, even when he and Adam were explicitly trying to explore them. While I academically understood why he kept his secrets (emotions don’t always make sense), I felt it went on until it started to grate on my patience.

I also very much appreciated the subject matter the book works with. It’s not an easy history and it would have been very easy for the writing to fall into didacticism. Or rather, I suppose the book is an example of didacticism (there’s certainly a lesson in it), but never comes across as too heavily didactic. I actually hate when authors let their sermon overwhelm their story in a fiction book. Preston and Rancourt don’t let that happen and I appreciated it.

All in all, I’ll call it a success.

As an added bonus, the authors happen to be running a giveaway for a $25 Amazon or B&N gift card. It’s running through the end of the month.