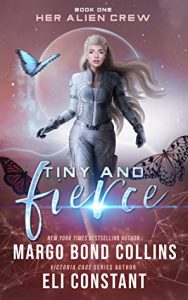 I Picked up a copy of  Tiny and Fierce, by Margo Bond Collins and Eli Constant through Booksprout.

In a galaxy where humans are considered the least of all races, she’ll build a crew that adores her strength and style.

When Tommelise took over her family’s deep-space salvage company, she never expected to stumble through a wormhole into a whole other galaxy full of strange alien races ruled by a cruel empress.

She learns she’s not the first human to wind up there—but all the others were captured and sold as slaves. She’ll have to fight to stay alive.

She thought all she wanted was to find a way home. But then she fell in love—three times over—and learned that together, her men would fight three times as fiercely.

Now, to keep her loves alive, she’ll have to free an entire system.

Utterly and completely bonkers, but kinda sweet too. I appreciate that, of the three men in the harem, only one is truly humanoid. The others, walk up-right (most of the time) but have alien anatomies that make for interesting reading and one eye-opening sex scene (the only one in the book and it’s mild). The plot is pretty ludicrous and things happy pretty helter-skelter. (I mean Lise manages to trip and fall through TWO uncharted wormholes in occupied space, for example!) But it’s still enjoyable all the same.

I didn’t like that the women the crew rescued were continuously referred to as the “slave women,” “slave stock,” “slaves,” etc. Emphasizing their status as former slaves over that of autonomous women. There was only one group of women. “The women” would have sufficed and made them feel like actual individuals and less like commodities, serving the theme of the book better I think.

All in all, however, I thought it a pretty piece of fluff and don’t consider the time I spent reading it wasted.

2 thoughts on “Review of Tiny and Fierce, by Margo Bond Collins & Eli Constant”