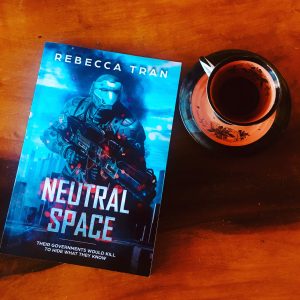 I won a copy of Rebecca Tran‘s Neutral Space

through Goodreads. This was especially exciting for me because she turns out to be a local author and I have been trying to read more books by authors who live in my region.

Description from Goodreads:
Lieutenant Jackson Peterson thought he knew who the enemy was. A bitter war with the Kelsairans made it abundantly clear. When Jackson saves a Kelsairan woman from a wrecked ship, the line is suddenly blurred. The enemy isn’t what the government said they were and he can no longer blindly follow orders. A shocking discovery leads Jackson down a sinister path of intrigue that could change the fate of two races. But, both the Kelsairan and the Human governments will kill him to keep their secrets. Jackson will risk everything to stop them. Will it be enough? Or will he die in the process?

Review:
This wasn’t bad, just simple. Simple in it’s writing and narration style and simple in it’s plotting. By this I mean the writing is readable, but not elaborate (and it REALLY needs another editing pass, especially to look a punctuation), the narration is a straight forward first person, past tense monologue and the plotting is….well, here’s where it all falls apart really. It’s simple and not deeply thought out.

For example, in all the universe the two characters get put in the same single prison. The male lead is already there and anticipates the female lead will be placed there when he hears she’s to be jailed. (Is there only one such prison in all the universe?) There was no mention of other women (except for a single staff nurse), so I don’t know if this was a co-ed prison. But when she arrived, she seemed able to wander at will and sleep wherever she wanted. She was never actually locked up at any point. That doesn’t seem very prison-like to me, but it sure was convenient for the plot.

Most of the book is a romance in space, which I don’t mind. I like those. But the plot is basically them running around talking to people that they already knew and somehow, miraculously uncovering, in some small amount of time, a secret that had gone undiscovered for 200 years. One of the clues they find is a copy of the original treaty, the breach of which started the war. You guys, if a war starts because someone is said to have broken a treaty, I really think someone would have thought to look at the darned thing before 200 years passed.

That war is basically just a background prop. You never feel the tension of it. The characters met ON VACATION. Yes, I know it’s the space-fairing equivalent of shore leave. But it’s hard to be concerned about a war when the main character trots off to go fishing and throughout the whole book they go wherever they want, including to their families, and no one ever stops them, there is never a battle, or a front, or any evidence of war.

While I appreciate that female lead was meant to be the more elite soldier, she spent the whole book being girly—changing clothes, putting on perfume, angsting about her virginity, and eventually marrying and having babies. She could have been a baker or a politician and been far more believable. Her character was too shallow and simple to actually carry what it was supposed to.

Lastly, there’s the humans and kelsairans, who were less different from one another than the Americans are from the Chinese. They shared the same mores and values. Their languages must not have even been that different, because the characters learned to speak alien languages in months, in one case without anyone to even teach him. He picked it up from listening to the guards talk to one another. So again, the cultures and universe are simple and not as diverse as they need to be.

I know I sound like I’ve trashed this book. I was admittedly disappointed to find it as flat as it is. But it is entertaining in it’s own ways, has a lovely theme, and I wouldn’t discourage anyone from reading it. I’d even be willing to read another of Tran’s books.