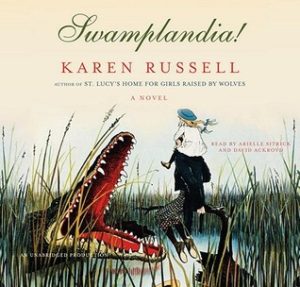 I borrowed an audio-copy of Karen Russell’s Swamplandia from the local library.

Description from Goodreads:
The Bigtree alligator-wrestling dynasty is in decline, and Swamplandia!, their island home and gator-wrestling theme park, formerly #1 in the region, is swiftly being encroached upon by a fearsome and sophisticated competitor called the World of Darkness. Ava’s mother, the park’s indomitable headliner, has just died; her sister, Ossie, has fallen in love with a spooky character known as the Dredgeman, who may or may not be an actual ghost; and her brilliant big brother, Kiwi, who dreams of becoming a scholar, has just defected to the World of Darkness in a last-ditch effort to keep their family business from going under. Ava’s father, affectionately known as Chief Bigtree, is AWOL; and that leaves Ava, a resourceful but terrified thirteen, to manage ninety-eight gators and the vast, inscrutable landscape of her own grief.

Against a backdrop of hauntingly fecund plant life animated by ancient lizards and lawless hungers, Karen Russell has written an utterly singular novel about a family’s struggle to stay afloat in a world that is inexorably sinking. An arrestingly beautiful and inventive work from a vibrant new voice in fiction.

Review:
Oh, I am well and truly torn on how I feel about this book. For one, it took me over a year to listen to it all. I borrowed it from the library and didn’t finish it before it was due, even after renewing it. Returned it and just wasn’t in any hurry to check it out again. It was almost a year later before I did. On the positive side, I was able to pick right back up where I left off, with no confusion. So, the story is easy enough to follow. On the negative side, I wasn’t invested enough to care that I didn’t know the ending for almost a year and I spent a lot of that time cringing and dreading where Ava’s narrative was obviously going. I REALLY hoped I was going to be surprised on that plot point, but predictably I was not.

I thought the setting was vivid and interesting, but the plot was kind of lost in it and the ending was so loose and anticlimactic I felt a little let down. The writing is very pretty though. I adored Kiwi’s narrator, David Ackroyd, but honestly I didn’t much care for Ava’s, Arielle Sitrick. She felt a little too stiff to me. All in all, I’m glad to have finished it, but also very glad to actually be finished.