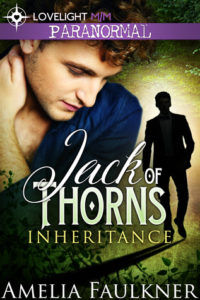 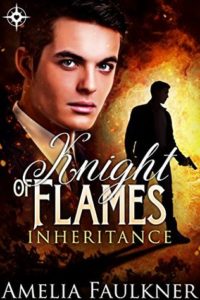 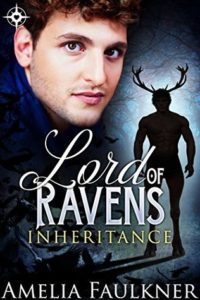 I picked up Amelia Faulkner‘s Jack of Thorns as an Amazon Freebie (it’s still free), I think I got Knight of Flames through Instafreebie, maybe for signing up to her newsletter, and I borrowed Lord of Ravens through Amazon.

Florist. Psychic. Addict.
Laurence Riley coasts by on good looks and natural charm, but underneath lies a dark chasm that neither heroin nor lovers can fill. Sobriety is a pipe dream which his stalker ex-boyfriend is pushing him away from. Luckily, Laurence has powers most can only dream of. If only he could control them.

Quentin d’Arcy is the product of centuries of wealth, privilege, and breeding, and is on the run from all three. A chance encounter with an arresting young florist with a winning smile could make him stop. Laurence is kind, warm, and oddly intriguing but Quentin’s wild telekinesis and his fear of sex make dating a dangerous game.

When opposites attract, they collide.

Desperate to fix his rotting life, Laurence prays for aid and accidentally summons a fertility god who prefers to be called Jack. Jack is willing to help out for a price, and it’s one Laurence just can’t pay: he must keep Jack fed with regular offerings of sex, and the florist has fallen for the one man in San Diego who doesn’t want any.

If they’re to survive Jack’s wrath, Laurence and Quentin must master their blossoming feelings and gifts, but even then the cost of Laurence’s mistake could well overwhelm them both. How exactly are mere mortals supposed to defeat a god?

I really quite enjoyed this, flawed as I think it is. I simply liked Lawrence and Quentin. I liked the slow burn of their relationship, Lawrence’s history and the villain to be defeated. But I also thought the book overly long, Quentin’s attempt at aristocratic English so stiff as to be painful and his naivety unbelievable. He’s supposed to have not known how to use a bath/shower combo, or a cell phone, or understand any slang at all. He would have had to literally grow up under a rock to be as clueless about the modern world as he is made out to be. I do see the foreshadowing for something in his past possibly causing this, that will come out in future books, but I still couldn’t buy into it. Despite that, I have the next book in the series and I’ll be reading it.

On the run from his family, Quentin d’Arcy has settled in San Diego with dwindling funds and the growing suspicion that his gifts might not be limited to telekinesis. When he meets a psychic who can control people’s actions with a few words, his comfortable life starts to unravel.

Laurence Riley almost died killing one god only to discover that he’s descended from another. Before he can come to terms with that revelation, Quentin’s twin brother walks into his life, and there’s no way to know what his motives may be.

Kane Wilson wants to make a better world: a world in which psychics are open about who and what they are without fear of reprisal or hatred. With the power to control others he might be able to pull it off, but there’s going to be collateral damage.

If Quentin and Laurence can’t get to the bottom of Wilson’s plan, Kane will out the existence of psychics not only to San Diego but to the world, and all hell will break loose.

I didn’t like this one as much as the first one, I’m afraid. I still liked it, mind you, but not as much as its predecessor. I found it predictable and Quentin’s naiveté about his own body almost drove me to distraction. If the man is asexual, fine. If the man doesn’t like sex, fine. If the man has had some past trauma and is afraid os sex, fine. But a 24yo pulling the old confused, ‘what’s this going on with my body’ schtick makes I want to scream. And his refusal to even look at or name his own anatomy, let alone Laurence’s annoyed me. How has a man lived 24 years and never experienced his own body? Dislike it, avoid it, shun it, sure. But don’t pretend he’s somehow lived his own life without ever noticing it was there or what biology makes happen every day! He comes across as if he might be on the Aspergers spectrum somewhere, but even then I’d expect him to know he has a penis, what it does and what it’s for, even if he doesn’t like it.

I liked the introduction of Frederick, Ethan and Adrien as side characters and I still find Laurence and Quentin a cute couple. I’m curious to see what is in Quentin’s past and how things progress.

Laurence Riley’s inheritance comes with a price – one he’s not at all sure he can pay. When his urge to hunt grows out of control, he sends a desperate prayer to his ancestor for guidance. But he never expected that Herne the Hunter would answer.

There are horrors lurking in Quentin d’Arcy’s past, but they won’t hide there forever. Something ancient is coming to take him home: a creature of nightmare who feasts on the flesh of children. When the choice is between his own life and the lives of innocents, there is no choice at all.

A legendary horror comes to San Diego, but it’s merely an emissary. Laurence has seen the real monster, and it’s a darkness which will destroy everything he loves – especially if Quentin ever finds out what it did to him as a child.

It’s down to Laurence to prepare for war against a force which far outmatches him. The enemy has the most powerful weapon of all at his disposal, and if they’re to stand a chance, Laurence must master the same power.

He must learn magic.

Of the three books I’ve read in this series this was the most disappointing. I felt like it dragged the plot out and didn’t deliver on what I expect the payoff to be. Meaning it threw a substitute enemy into the mix, which was defeated, but the book ended before the real challenge started, making it a quintessential middle book. Maybe this won’t bother others, but it did me. It makes the series feel like one of those that will never actually reach a conclusion, so why bother to keep reading?

I also reached my tipping point with Laurence’s unflappable mothers in this one. Yes, she’s been calm throughout the series. ‘Oh, a god is trying to kill you? That’s nice dear.’ ‘Oh, a mind controlling psycho is after you? Do be careful, dear.’ ‘Oh, my son is in a coma? It’ll be ok, dear.’ It has consistently annoyed me in each book, but in this one I just wished she hadn’t even been included at all, she was such a thin, unfleshed character.

Having groused about those things though, I did still like Laurence and Quentin as a couple. I like most of the side characters and I’m curious about the brother, Frederick. The writing is easy to read and the editing not bad. I noticed a few typos, but not many. All in all, I’ll likely continue the series, but I don’t think I’ll be in any hurry to rush into it.