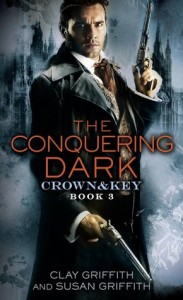 I received a copy of The Conquering Dark, by Clay & Susan Griffith from Netgalley.

Description from Goodreads:
The Crown and Key Society face their most terrifying villain yet: Gaios, a deranged demigod with the power to destroy Britain.

To avenge a centuries-old betrayal, Gaios is hell-bent on summoning the elemental forces of the earth to level London and bury Britain. The Crown and Key Society, a secret league consisting of a magician, an alchemist, and a monster-hunter, is the realm’s only hope—and to stop Gaios, they must gather their full strength and come together as a team, or the world will fall apart.

But Simon Archer, the Crown and Key’s leader and the last living magician-scribe, has lost his powers. As Gaios searches for the Stone of Scone, which will give him destructive dominion over the land, monster-hunter Malcolm MacFarlane, alchemist extraordinaire Kate Anstruther, gadget geek Penny Carter, and Charlotte the werewolf scramble to reconnect Simon to his magic before the world as they know it is left forever in ruins.

Review:
If I was giving this a numerical star rating I would give it a 2.5 and I’d roll up reluctantly. I’d honestly like to roll down, but mechanically the book is fine. For me, that’s just about the only thing I would say was fine.

This book is action packed. It starts on the very first page and doesn’t stop until the very last and I’m almost being literal when I say that. This book is ALL, let me repeat that, ALL running, fighting, attacking, being attacked, dismantling this mechanized beast, defeating that elemental wizard, shooting him, stabbing her, setting this baddie on fire, blowing that up, almost falling into that lava pit, narrowing avoiding being dashed on those rocks, skidding to a stop inches from this ledge, etc. It just never ever stop.

And lets be honest, a book needs a little stopping on occasion. Character need time to discuss and grow (none did here). Plot needs non-fighting moments to progress (it really didn’t here). You wouldn’t think action could get boring, but in its repetition and exclusion of ANYTHING else it really did.

Additionally, I found the villains’ motivation flimsy (both the main one and the shadowy one). But beyond that I’d really like to rage a little about how often female villains’ motivations come down to romantic rejection, as if that’s our only available motivating force. Gah! Think larger people.

The only saving grace was the occasional amusing quip and that I basically still like the characters. Though their tendency toward artificially rousing speeches and heartfelt thanks of each-other got a little saccharine and Kate’s transformation from a ballsy 20-something to a coddling ‘that’s nice Dear’ spouting mother was graceless and abrupt.

Perhaps this is just third book syndrome and the series will improve, but at this point I think I might be tapping out.