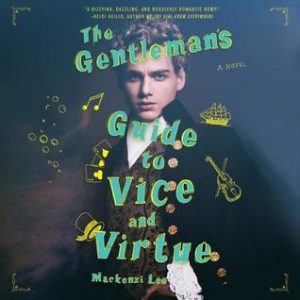 Description from Goodreads:
Henry “Monty” Montague was born and bred to be a gentleman, but he was never one to be tamed. The finest boarding schools in England and the constant disapproval of his father haven’t been able to curb any of his roguish passions—not for gambling halls, late nights spent with a bottle of spirits, or waking up in the arms of women or men.

But as Monty embarks on his Grand Tour of Europe, his quest for a life filled with pleasure and vice is in danger of coming to an end. Not only does his father expect him to take over the family’s estate upon his return, but Monty is also nursing an impossible crush on his best friend and traveling companion, Percy.

Still it isn’t in Monty’s nature to give up. Even with his younger sister, Felicity, in tow, he vows to make this yearlong escapade one last hedonistic hurrah and flirt with Percy from Paris to Rome. But when one of Monty’s reckless decisions turns their trip abroad into a harrowing manhunt that spans across Europe, it calls into question everything he knows, including his relationship with the boy he adores.

Review:
I went back and forwards with this one, sometimes really loving it and other times distinctly disliking the main character and/or rolling my eyes over too-stupid-to-live stunts that make no sense, other than being obvious bids to move the plot in certain directions. While I loved the narrative style and Monty’s sense of self-depricating humor, I thought the whole thing got too ridiculous to believe by the end. The narrator, Christian Coulson however did a MARVELOUS job with the story.