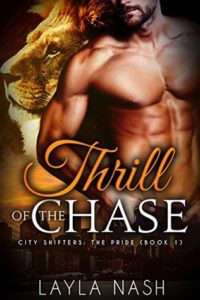 I downloaded a copy of Layla Nash‘s Thrill of the Chase when it was free on Amazon.

Description from Goodreads:
Up-and-coming chef Natalia Spencer has enough on her plate dealing with a struggling restaurant and a corrupt manager selling her out of pantry and kitchen. She doesn’t have time for arrogant customers, even a gorgeous corporate raider in a bespoke suit with muscles that just don’t stop. Until, of course, he buys her restaurant and saves her life.

Logan Chase, alpha of his lion shifter pride, is intrigued when the feisty chef kicks him out of her restaurant. He’s enraged when someone attacks her. And he’s intoxicated when he finally gets close enough to kiss her. But when he shifts in front of her and his lion comes out to play, he risks losing Natalia forever.

Natalia just wants to cook and snuggle with a nice guy. Shacking up with a man who’s also a lion means inviting a new level of crazy into her life, along with his unruly brothers, and even her werewolf best friends warn her away. Can she and Logan create a steamy relationship from scratch, or are they a recipe for disaster?

Review:
So, the mechanical writing is fine and I thought the outline of an interesting story was too, but…BUT at one point, in the beginning, I flipped back and forwards between pages and even came to the internet to ensure I had an up to date copy, because I was sure I was missing a chapter or two (or five).

Let me lay it out this way, despite being 130 pages long, there is nothing in the book beyond what is in the blurb, almost literally. Natalia throws Logan out of her restaurant, or at least tells him he can’t eat. He then hires her to cook him a meal, her not knowing it’s him until she arrives. When she arrives he’s already decided to treat her like a mate, she is his mate. There are no interactions between the two of them between the two events and no internal thoughts given to the reader. So, as a reader, I was just like, what? When did that happen? How did that happen?

Then within two days they’re declaring love, making plans to move in with each other, etc. There is no development of a relationship AT ALL.

Lastly, as a major point of contention for me, big cats like lions don’t purr. They can’t. They don’t have the connection of small bones that are vibrated to make the sound. They are literally unable to purr, which made Logan’s constant purring a grating inconsistency everytime it happened. I know this is fantasy, so it probably doesn’t matter. But I’m pretty sure this is an oversight on the part of the author and an annoying one.

I did like the characters, even the side ones. I thought Logan’s confused desperation was cute and his brother gave some very sage advice on more than one occasion. And again, the writing is ok. The book isn’t even unfun to read. But it’s no where near developed or fleshed out enough to feel real and substantial.