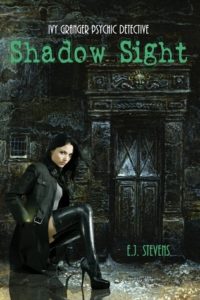 I downloaded a copy of Shadow Sight, by E. J. Stevens, from Instafreebie.

Description from Goodreads:
Welcome to Harborsmouth, where monsters walk the streets unseen by humans…except those with second sight, like Ivy Granger.

Some things are best left unseen…

Ivy Granger’s second sight is finally giving her life purpose. Ivy and her best friend Jinx may not be raking in the dough, but their psychic detective agency pays the bills—most of the time. Their only worry is the boredom of a slow day and the occasional crazy client—until a demon walks through their door.

A demon attorney representing the water fae? Stranger things have happened. And things are about to get very, very strange as a bloodthirsty nightmare hunts the city of Harborsmouth.

There’s blood in the water…

Kelpies have a reputation for eating humans. Unfortunately, Kelpies are the clients. When an Unseelie faerie this evil stalks the waterways of your city, you have to make hard choices.

The lesser of two evils…

Review:
Gotta say, it wasn’t bad, but I wasn’t impressed. Here’s the thing, if you read an Urban Fantasy, you expect the main character to be central to the action. Ivy was not. She was hired to do a job and then went around and recruited the people who performed the action. She herself did nothing. In fact, it didn’t even make sense that it was here that was hired, instead of, say, the hunters or any magical creature more able to repel an attack.

The enemy is a shadow throughout the whole book. She’s told about them and then just sort of goes about life. At around 75%, they finally show up, but they’re still not fleshed out. It’s a faceless army. There’s no actual individual enemy. And they’re defeated with ease.

Then at about 90% in the author throws a romance at the reader. It seriously comes out of nowhere and is based on nothing. And the romantic partner somehow knows all about Ivy when no one else did, least of all her. (This is all just tacked on at the end and not even incorporated into the story.)

The book is just basically Ivy marching around explaining things and it was painfully unexciting. The writing is fine, if on the silly side, but the book just barely held my interest. Well, the writing was fine once you managed to wade through all the info-dumps. Omg, they were endless.

Lastly, as an aside, I have to address that cover. Look at that sexy broad in her sexy thigh-high boots, yeah? Here’s a quote from Ivy concerning herself and shoes (but really more her personality type): “Me? I have one pair of black Doc Martens boots and an old pair of trainers.” This is the sort of character she is. She also spends most of the book in a baseball cap and avoids all amorous or sexual contact. So…um…who the hell is that supposed to be on the cover? Because I know it’s not Ivy.