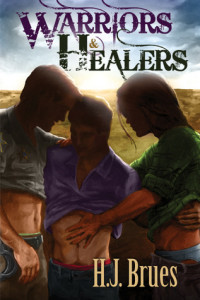 I bought a copy of H. J. Brues’ Warriors & Healers.

Description from Goodreads:
When Dr. Daniel Ugarte arrives from Spain to work on the Apache reservation, he meets Jeff Redbear, a Native American social worker, and Sean McCallum, the local sheriff. The men come from three different worlds, and they have little to no common ground until an immediate, unexpected attraction sparks between them. Facing the growing desire is just the beginning of the obstacles they will face: Daniel’s past makes him blind to Jeff and Sean’s feelings for him and terrified of standing in the way of their love for each other; Sean has to fight his present worry of not being strong enough to protect the men he loves; and Jeff’s pride and fear of future rejection make him push Sean and Daniel away before they get too close to his heart. But the strength of the love that blooms between them is the worst of their fears, because it will take as much courage to run from it and go on living empty, meaningless lives as it will to fight for the happiness they might never reach together.

On a side note, that’s a wretched cover!