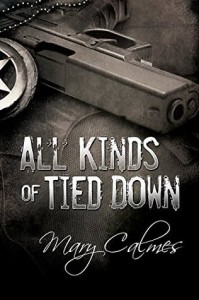 I borrowed an ecopy of All Kinds of Tied Down, by Mary Calmes. (Thanks, L.)

Description from Goodreads:
Deputy US Marshal Miro Jones has a reputation for being calm and collected under fire. These traits serve him well with his hotshot partner, Ian Doyle, the kind of guy who can start a fight in an empty room. In the past three years of their life-and-death job, they’ve gone from strangers to professional coworkers to devoted teammates and best friends. Miro’s cultivated blind faith in the man who has his back… faith and something more. As a marshal and a soldier, Ian’s expected to lead. But the power and control that brings Ian success and fulfillment in the field isn’t working anywhere else. Ian’s always resisted all kinds of tied down, but having no home—and no one to come home to—is slowly eating him up inside. Over time, Ian has grudgingly accepted that going anywhere without his partner simply doesn’t work. Now Miro just has to convince him that getting tangled up in heartstrings isn’t being tied down at all.

Review:
Ok, so I’m a fairly new Calmes convert. I’ve had mixed results with what I’ve read so far. I seem to really like or dislike a book by her. There is very little middle ground. And while those I dislike I can tell you exactly what it was that put me off, those I like just kind of fill me with a vague unnamed warmth that I can’t very clearly communicate. I suppose this could be called a purely emotional response, because, lawdy, it can’t be the complexity of the plots or the depth of the characters. Neither are extensive, the plot is basically a series of events allowing the characters time to work their feelings out (ok, so there basically isn’t one) and the characters could be called well fleshed out only if they were, in fact, 12 year olds. As true adult males, they lack a lot. Nor can it be the realism. Seriously, bones knit in weeks instead of month and apparently every other law enforcement agent in American is openly gay and the remaining half are all open and accepting of sexual diversity. It can’t even be the consistency, since the scene that ostensibly gives the book its most obvious title actually breaks the pattern set throughout the book, going against character for at least one of the men.Regardless, this book is no exception to my obvious preference patter and it falls on the warm fuzzy, I liked if for unknown reasons, side of the equation. I can objectively tell you it was full of cliché characters. The über alpha that secretly just wants to submit, the fashion conscious gay man and fashion oblivious ‘straight’ guy, yep I’ve seen them all before. What’s more, it’s full of cliché Calmes characters. The names change from book to book, but the characters remain largely the same. The thing is that they apparently work for me. I keep thinking, ‘this should be a crap book. It’s completely formulaic. In fact, even having only read a fraction of Mary Calmes vast collection, I’ve still read what could easily be mistaken for this book already.’ I keep thinking that, but then I think, ‘yeah, but can get another one, please.’ So, I duck my head in shame, but I admit it out loud; this book is simplistic, cliché, predictable and my god the sap at the end is enough to suffocate me (honestly, this I could do without) but I liked it. I just can’t help it. Whatever alchemic hormone mix is secreted into my bloodstream as a result of reading this particular combination of man on man action is a win, even when I don’t want it to be.