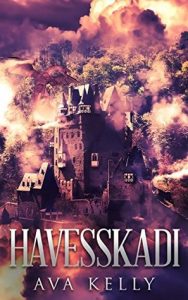 I received a copy of Havesskadi

, by Ava Kelly, through Netgalley.

Description from Goodreads:
Nevmis, the red dragon, is hunting her own. Up in the icy peaks of the northern mountains, Orsie spends his lonely days hiding from her, but eventually he is found and his dragon magic stolen. Cursed to wander the lands as a mortal unless he recovers his magic before twenty-four rising crescents have passed, Orsie embarks on an arduous journey. Spurred by the whispers in his mind, his quest takes him to a castle hidden deep in a forest.

Arkeva, a skilled archer, is trapped in an abandoned castle deep in the woods, his only company two companions—one kind, the other cruel. Then a stranger arrives, a young man who soon finds himself confined by heavy snowfalls—and in danger from what slumbers in the shadows of the castle.

Review:
This isn’t horrible, but it’s too long by half and heavily dependent on two people not having a conversation that the continued avoidance of feels manipulated and unnatural. Further, there’s very little character development and almost no actual characters beyond the two main ones. I also have questions about these all important dragon souls. It’s an interesting idea, but not nearly well enough explained. All in all, it’s a sweet story, but it’s a poorly executed book. 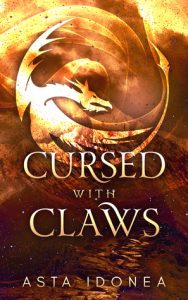 I received a copy of Asta Idonea‘s Cursed With Claws through Netgalley.

Description from Goodreads:
A dragon dwells atop the mountain that overlooks Ode’s village. Every year the surrounding villages gather to make an offering to keep the beast at bay: chests of gold and a human sacrifice.

When the wise men choose his beloved sister, Malle, as the latest sacrifice, Ode immediately offers to take her place. But instead of a dragon on the mountain ledge, he meets a mysterious young man.

Review:
I’ve learned. It took a little while, but it’s finally sunk in. Less Than Three Press publishes a certain sort of novella that I dislike. I always get caught by the blurb, but now I know not to be fooled. I read Alexandria Bellefleur’s Frostbite

last year, which is also by LTTP and essentially the same plot as Cursed with Claws. I felt about it the same as I did this one. Meh. That’s it.

Cursed beast in a mountain cave? Check. Ingenue young man encounters him? Check. Almost instant attraction, despite one party being deadly/monsterous (both dragons)? Check. Love developing in too short a time? Check. Happily ever after? Check. Everything is very shallow, very linear and very Mary Sue/Marty Stew. It’s not that there’s necessarily anything wrong with it. There’s obviously a market, so those that enjoy it. I’m just not one of them. I was not impressed by Idonea’s Cursed with Claws, but it was the book that finally taught me what to be on the lookout for, so I can avoid reading it or its ilk again. 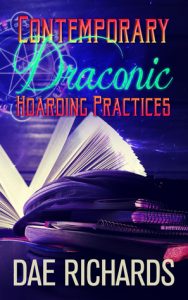 I received a copy of Contemporary Draconic Hoarding Practices, by Dae Richards, through Netgalley.

Description from Goodreads:
While researching his thesis, Clayton’s work leads him to Syralis the wise, a dragon and professor at the university where he studies. Syralis’ hoard contains original manuscripts which are invaluable to Clayton’s research. Clayton soon finds himself one of the few students to ever study under Syralis, and during their lessons Clayton learns not only about medieval art, but his own history and his unusual magical sensitivity as well.

Clayton also finds himself enamored of Syralis, but when that attraction proves mutual, not everybody is pleased…

Review:
Not bad for a bit of fluff, but honestly that’s all it is. I liked the characters, the world and the writing, but I would have appreciated more to the story than insta-lust, a small misunderstanding and an easy resolution. I don’t regret reading it and would read more of Richards’ work, but there was nothing here to impress me either. A nice, safe, middle of the road read.