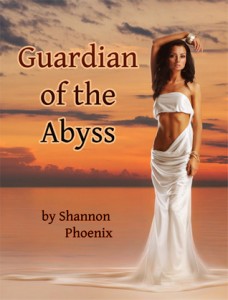 I got my copy of Shannon Phoenix‘s novel, Guardian of the Abyss from the Amazon KDP list.

Description from Goodreads:
Buried at sea by the sorcerers who created him, Abaddon is a gargoyle unable to heal himself and unable to replenish his energy. He has lived here for longer than he can remember, with no hope of escape. Time is against him as the sea eats away at him, body and soul.

When her diving partner tries to kill her to take over her company, Sarah finds herself trapped beneath the waves and dying. Having brought light to Abaddon’s dark existence at last, only she can grant him the courage to do what must be done to escape his watery prison.

Abaddon must sacrifice his wings to save her. Sarah must come to terms with being trapped with someone she has been raised to believe is a demon, and face the betrayal that nearly destroyed her and the company she built. Together, they must take on the ocean and their own fears. The consequence of failure is death.

Review:
Guardian of the Abyss wasn’t exactly what I was expecting. Most of it took place in the cave under the sea, which means it was just Abaddon and Sarah alone in the near dark. There were a lot of awkward getting to know each-other moments, a few rushed sex scenes and a couple sweet passages, but almost no action at all.

Once they reach dry land at last things pick up a bit, but I also felt like the story started to unravel a little bit. All of a sudden werewolves, vampires, goblins, etc were introduced and I was left wondering what the society looked like. There had been little previous indication that it was other than modern American up until that point. Plus, despite no introduction to her abilities, Sarah suddenly seemed all powerful and awe inspiring. It didn’t feel like she deserved half the praise she received since she didn’t seem to work at anything. It all just came so naturally. She had no fear of any of the paranormals she suddenly encountered, boldly chastised a powerful gargoyle and somehow brought peace where none had been for hundreds of years. Not to mention saved a species (and we’re never told what makes her special). It was all just too easy for her.

I also had a little trouble with small details like the fact that Abaddon was 2,000 years old, had been stuck in a cave for 400 years, didn’t know what a door knob was, but had no trouble describing something as sub-atomic. Some of his ignorance of modernity was pretty funny though.

For all that, it was still a fun little read. Abaddon was extremely honourable and I enjoyed that aspect of his personality. Sarah was stubborn to a fault and more than willing to take charge and demand what she wants. You don’t see that in PNR heroines too often. Together they were a cute, if occasionally inept couple. Final call: it might not top my favourites, but I enjoyed it all the same. 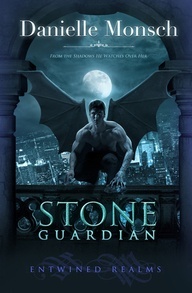 Author, Danielle Monsch, sent me a copy of her Entwined Realms novel, Stone Guardian. I also happened to notice there is a Goodreads giveaway running to win your own copy. Go here.

Description:
Gryphons flying past skyscrapers? Wizards battling it out in coffeehouses? Women riding motorcycles with large swords strapped to their backs? All normal sights since the Great Collision happened twenty-six years ago.

Well, not normal for everyone. Larissa Miller may have been born after the Great Collision, but as a history teacher who lives in the human-only city, she has never come into contact with any other race or species, nor has she wanted to. Her life is as ordinary as it gets – that is, until one day she walks out of her apartment and is attacked by a mob of Zombies, only to be saved by a Gargoyle.

Gargoyles trust no one outside their Clan, but due to a cryptic prophecy, Terak, Leader of the Gargoyles, has been watching over the human woman for months. While he can find no reason why the woman has been singled out, something about her stirs every protective instinct within him. When the attack confirms that the threats against her exist and are real, he convinces Larissa that though their races have never been allies, the best chance of discovering why she has been brought into his world is by working together.

In the course of their investigation Terak becomes entranced by his little human. But when he discovers why Necromancers want her and the great reward that awaits him if he betrays her, he must choose between the welfare of his Clan and not only Larissa’s life, but the fate of this New Realm as well.

Review:
I generally quite enjoyed this. It had a good story, a little humour, some romance, and a couple kick-ass females (always a plus). I’m thinking Fallon, Aislynn, Laire, The Oracle. Unfortunately Larissa, the heroine, wasn’t one of those awesome women. She was alright, not stupidly stubborn or so naive she practically begged to be victimised, but there didn’t seem to be much to her. She was a bit of a shadow puppet until Terak came along and gave her some substance. Don’t get me wrong I enjoyed her well enough, but her life basically consisted of work and letting her father and brothers control her life in an incredibly patronising fashion.

As much as I might complain about the way Larissa caved to her male family’s whims I was also a little disappointed that the family, who played quite a prominent role in the beginning, had almost no place in the bulk of the book. The small inclusion of one of her four brothers was almost a distraction it held so little relevance. Her family was really important to her. Much of her life was structured around them and their overprotectiveness, so I found their absence conspicuous, especially at the end.

The mystery of why everyone was looking for Larissa kept me guessing until the end. Though I have to admit that I found it odd that she could just keep going home when so many baddies were after here. Did none of them know how to dial 411? Having said that, I quite enjoyed Reign as an antagonist. He and his obsession with Fallon piqued my interest for future books. As did Fallon’s strange conversant at the end. I have my guess, but we’ll see.

I liked Larissa and Terak as a couple, but I have to admit the sex scenes did little for me. The first one was too smooth for two virgins (and I’m still wondering about Larissa’s lack of hymen). The last one…well no, it was just wrong on too many levels to list. But beyond this one small complaint I liked them together. I especially liked Terak.

There were a few typos here and there, mostly missing particles. It wasn’t particularly distracting. The book was well written. The dialogue was comfortable and Larissa was quite witty at times. I look forward to the continuation of the series.