I picked up a copy of Unhinged, by Onley James, as an Amazon freebie. 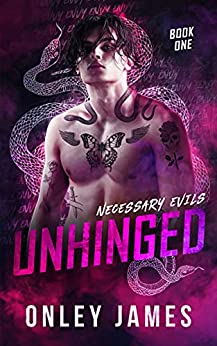 Adam Mulvaney lives a double life. By day, he’s the spoiled youngest son of an eccentric billionaire. By night, he’s an unrepentant killer, one of seven psychopaths raised to right the wrongs of a justice system that keeps failing.

Noah Holt has spent years dreaming of vengeance for the death of his father, but when faced with his killer, he learns a daunting truth he can’t escape. His father was a monster.

Unable to ignore his own surfacing memories, Noah embarks on a quest to find the truth about his childhood with the help of an unlikely ally: the very person who murdered his father. Since their confrontation, Adam is obsessed with Noah, and he wants to help him uncover the answers he seeks, however dark they may be.

The two share a mutual attraction, but deep down, Noah knows Adam’s not like other boys. Adam can’t love. He wasn’t born that way. But he refuses to let Noah go, and Noah’s not sure he wants him to.

Can Adam prove to Noah that passion, power, and protection are just as good as love?

There are more problematic aspects to this book than not, honestly. But it’s fictional and oftentimes the unspoken compact between the author and the reader to ensure the main characters remain safe (even as they struggle) and have a happy ending makes the book safe enough to allow the reader to say, “I acknowledge this would be reprehensible in real life, but in this fictional setting I’m going to set that fact aside and enjoy the fiction of it.”

That’s the intersection I stood at while reading Unhinged. It’s a crazy, fun read and I enjoyed a lot of it, with the exception of one big thing. Personally, I couldn’t abide the layering of Noah’s history of catastrophic child sexual abuse with his adult sex with Adam. They are separate events, true. But personally I just don’t want child rape in my sexy-time books, in general. I don’t like to associate those two things in my mind AT ALL.

Certainly it qualifies for everything I said in above paragraph. But I try to avoid rape in the books I read for entertainment, even a history of it. I absolutely don’t want to read about a kid getting raped (or an adult remembering being raped as a child) and then turn the page and immediately feel the flutter of sexual excitement from the subsequent sex scene. I want those two things MILES apart. I do not want them associated in ANY WAY.

That’s a personal hard limit for me and Unhinged all but smashes them together. Noah uses sex to help deal with his emerging memories of abuse, so the reveal and discussion of the abuse was almost always immediately followed by a sex scene. Which means the reader is still remembering the child abuse while feeling the titillation of the sex scene. No thank you from me on that front.

But unless every book in the series follows the same plot-line then I can say that I liked the rest of the book enough to continue the series. I liked Adam’s ‘I just can’t human well’ crazy possessiveness. I liked Noah’s acceptance of it. I liked the brothers snark. The sex was sexy. There was a large aspect of this plot I disliked having to engage with. But I liked the overarching series-level story and look forward to getting to know the other 6 brothers. 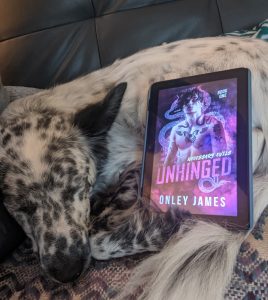