I picked up a copy of the four-book compilation of the Wicked Monsters series, by Skye Jones and Marissa Farrar the other day. Then, later, realized I actually already had each individual book. So, it turns out I now have this series twice.

One girl, five monsters, one hell of a ride.

Taken from the Pit where she was raised, Aisha believes all vampires are horrifying… Then she finds herself in Dashiell’s possession.

Powerful, handsome, and charismatic, Dashiell is not what she thought her master would be.

His dark desires draw her into his world, and things heat up between them.

But with a demon gargoyle scratching at her window, and wolves sniffing at the door, Aisha might not stay in the vampire’s grasp for long.

Danger and temptation surround her on all sides, but Aisha is determined to fight them all.

I did write individual reviews as I finished each book. They’re below.  But I’ll say a few overall words first. This was bad. It started out bad and got worse as it went. As you’ll see, I was so distracted by the authors’ refusal to call sexual slaves, slaves in book one that I barely focused on anything else. But once the cast list expanded this was less jarring. But the sex because less and less feasible and the dialogue more and more atrocious as the series progressed. Until, by the end, I think I was reading in a permanent cringe.

Additionally, the plot only makes even a little sense if Aisha literally has a magical vagina…maybe addictive in some fashion. There isn’t any reason 5 powerful men instantly dedicate themselves to her, above their own self-interests with nothing more than a single sex act. (I mean, her magic pussy even brought a demon back to God. I don’t think I can roll my eyes hard enough for that!) All in all, the only positive thing I can say about this series is that, having read it, I can mark four books off on my yearly Goodreads challenge. 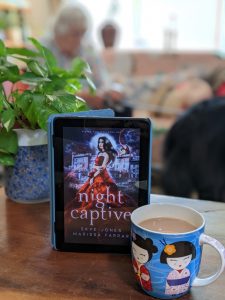 I’m both torn and not torn about this book, which I understand is confusing. I’m not torn in the sense that I can 100% say with certainty that I did not like this book. But I am torn in the sense that this is the first of four and that gives the series a lot of time to improve…or at least grow past the things I hated so much in this first book. Should I give the next a chance or not? Decision, decisions.

There are numerous reasons I didn’t like this book. But I’ll state upfront that the writing itself seems fine. I didn’t even notice any serious editing mishaps. And I appreciate the bisexual characters. But I just really did not enjoy the overall tone of the book and there were several linguistic quirks that almost drove me to rage. Here’s the biggest one. The authors refer to Aisha and her ilk as serfs. But they aren’t. They’re slaves. These words do not mean the same thing. They cannot be used interchangeably and the characters are not serfs. They are property. They don’t have any of the rights or protections of serfdom. They are slaves. And I found Jones and Farrar’s avoidance of the language reprehensible.

If you are going to be ballsy enough to play with the power dynamic of a master/slave sexual relationship, you shouldn’t skirt around the realities to make it more palatable by wimping out on the language. You need to call it what it is. Anything less is just skeevy.

This is only reinforced by the way that Dashiell is referred to as Aisha’s lover. He is not her lover. She is not his lover. He owns her. There is no equality. There is not relationship outside of his ownership of her.

When I mentioned this elsewhere someone said, “Sounds like some white supre[macist] bs that re-imagines serfdom as the same thing as slavery.” And that’s just it. It feels supremacist. It feels like someone wanted to snicker and bask in the slavery trope, but didn’t want to truly have to face the atrocity that is slavery.

Again, write slavery tropes, sure. But be honest enough to call it what it is.

But the book ends with Aisha escaping her slave master and there’s a chance of the next book being more tolerable. But I honestly don’t expect much. 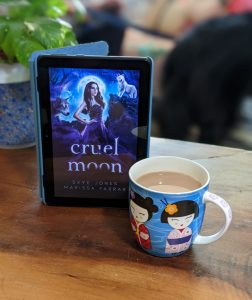 I did appreciate that Aisha was standing up for herself. She made some very good arguments, not that they made any difference. But I continually came up against the question of how and why Aisha is able to articulate herself so well. She grew up in a very limited environment. She’s far too educated and well spoken for the history the authors have given her and I felt it sharply in this book.

I’m also still not particularly enjoying the tone of the book…series really. Not on any deep reason, just in a not-good-for-me way. The whole thing just feels super ick and I’m struggling with it. 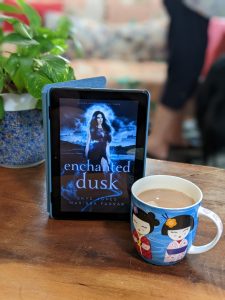 By this point I’m pretty much finishing this box set/series by grit alone, because I don’t want to leave it languishing in my Kindle Cloud unfinished. But I’m done, toast, really really not enjoying anything about it.

The sex is becoming increasingly ridiculous in an attempt to incorporate all five men. Some of it doesn’t sound at all enjoyable, or like the character herself is enjoying it. I can’t account for all these men dedicating themselves to Aisha by anything but a magic pussy. It’s just stupid really. And I am 100% sick of the hollow Aisha worship. And Aisha is far, far, far, far too knowledgeable about, well, everything, for someone who grew up without experiencing anything.

On a positive note, the word slave is finally used to describe the slaves, though only the once and not in reference to Aisha or in acknowledgement of those who actually held them.

I will read book four, just to finish it. But I don’t anticipate enjoying it any more than this one. 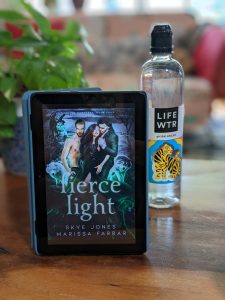 So, I managed to read this whole series. I think I deserve an award. So, does anyone else who made it through this drek. It was…not good. The final random plot event was both predictable and poorly done. It was just more people who wanted Aisha’s magic pussy. I got so tired of it.