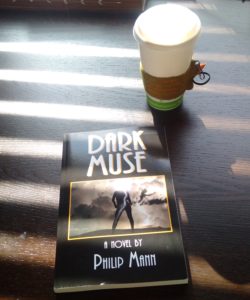 I won a signed copy of Dark Muse from the author, Philip Mann through Goodreads.

Description:
You can’t quite reach it. That goal, that project. You’re just out of reach of making that spectacular story, or that painting that will carry your name for years to come. You need a muse. Vi Gold or Lee Marvin will be glad to help. Either of these two ladies will give you that ride on the rocket, that trip to the well that gives you what you need.

But be careful. Too many rides on that rocket, or too many trips to the well, and you could wind up insane. Or dead.

Vi has just seen another friend kill himself, and she has helped him do it. She’s at the end of the rope herself when she meets Cal Simon, a normal, helpful man who tries to console her. Putting aside her fears and caution, Vi lets him get close. At last, she has a normal, sane boyfriend. But she won’t tell him about what she really is. He wouldn’t believe her anyway. And if he did, he would run away. Better to let it be, and deal with that problem later. That problem being that Cal might go insane if she slips up.

Lee Marvin is similar to Vi, but her abilities are far stronger. When they meet one night, they form a bond, as comrades in arms. With Lee. Vi can be who she truly is, and not worry about being judged or doing harm. But Lee’s casual way with violence, and the way she talks about normal people are both very disturbing to Vi.

Things are difficult enough, and then Lee kills somebody.

Review:
This is a Jewish paranormal romance! How often to you see that? The only other one I can really think of is Shira Glassman and she leans much more toward YA. So, I was super excited to read this. Sadly, that excitement didn’t last long.

I’m generally a literary monogamist, reading only one book at a time. But occasionally, when I’m not enjoying something but really want to finish it, I’ll let myself read a second book too. In these cases, I tend to read a chapter or two of the book I’m struggling with, a whole other book, another couple chapter or two, then a whole other book, etc. How many books I read before finishing the first one can serve as a barometer of how much I’m not enjoying the primary book.

In this case, I read five other books and listened to one audio short story. I found I could barely struggle through a single chapter before I wanted to run off and read something else. And the problem wasn’t so much the story, it was the writing.

The writing style is stiff and the dialogue especially so. Characters use names and “my dear,” “my darling,” “sweetie,” that sort of endearment far, far, far too often. And they all talk like they’re 80, despite being in their late twenties.

Editing is also a bit of a mess. I mean, there are errors in the synopsis, so you can easily imagine how many are in the book itself. Plenty, even if you don’t count how often a space is included before the final punctuation in a sentence. (Why?) It’s still easily readable, but it’s a distraction in a book that was already barely holding my interest.

There are a number of inconsistencies in the narrative and I dislike how anyone who isn’t supposed to be from Canada (there’s a character from Serbia and one from Jamaica) speaks in choppy, child-like, non-sentences, even if they were supposed to have lived in Montreal for decades.

Lastly, the book just feels scattered. You have a woman with a mysterious curse/gift. She’s had it for 15 years, her whole family has it, but she suddenly decides, right now, to find out what it’s about. Why now? Why not any time in the past? The main character Vi just kind of coasts along asking random questions of random people and getting random answers. No one expresses surprise, or any real notable emotion at all at her oddity (people needed to be shocked and they weren’t, none of them were). Characters pop up and are given fairly significant page time that don’t seem to contribute much to the narrative and then there is a sudden, unearned, reprieve from a minor side character. I never felt the book had any sort of peak and I was basically bored.

The glossary was a nice touch, but it was hardly necessary for four words. I did like the idea behind the book and that Vi had a lesbian experience (even if it or the fact that her character didn’t seem the sort for sex outside her monogamous relationship was explored), but I’m afraid it wasn’t done well enough to pull off the meaningful story it set out to tell. Which is a shame; characters who happen to live normal Jewish lives are so rare I really hoped to see them well represented. 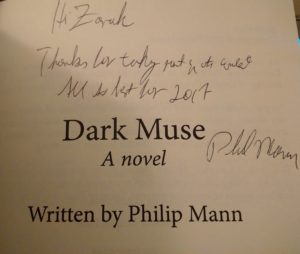 *Edited to correct a typo after the author snakily commented on the Amazon review to point it out, comparing editing a book review to editing a published book and working hard to discredit the review in general. I don’t know about other people, but from this readers perspective that just looks bad. I disliked the book, sure, had some criticisms that were mine to make, but was still willing to give the author credit for creating a story that others might enjoy. I had no issue with the author himself. But he’s just shown himself to be thin skinned and petty, never a good look on a professional author.

*Edit Sept 2019: I’ve just discovered that this author has recently been badmouthing me in an author group and wrote a fairly gross passage about me in his latest book. I’m not going to engage it beyond this note (and maybe a mocking tweet). But if you happen to be a reviewer thinking of reviewing this author’s work, you might want to go in knowing he does not take criticism well (holding 3 year grudges, for example). 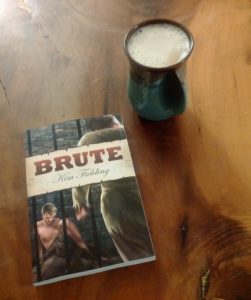 I purchased of a copy from Kim Fielding‘s Brute from the publisher, Dreamspinner.

Description from Goodreads:
Brute leads a lonely life in a world where magic is commonplace. He is seven and a half feet of ugly, and of disreputable descent. No one, including Brute, expects him to be more than a laborer. But heroes come in all shapes and sizes, and when he is maimed while rescuing a prince, Brute’s life changes abruptly. He is summoned to serve at the palace in Tellomer as a guard for a single prisoner. It sounds easy but turns out to be the challenge of his life.

Rumors say the prisoner, Gray Leynham, is a witch and a traitor. What is certain is that he has spent years in misery: blind, chained, and rendered nearly mute by an extreme stutter. And he dreams of people’s deaths—dreams that come true.

As Brute becomes accustomed to palace life and gets to know Gray, he discovers his own worth, first as a friend and a man and then as a lover. But Brute also learns heroes sometimes face difficult choices and that doing what is right can bring danger of its own.

Review:
I thought this book was ok, but ultimately a bit of a disappointment. This is partly because I went in really expecting to love it and ended up just liking it, which is fine, really. Normally that would be enough, but when you have especially high hopes, ok feels far worse than it is.

There were several things I didn’t like about the book, but let me start by saying how much I did like Brute, Gray and the characters of the palace. Plus, I loved that the main characters are a bit older, both physically disabled (one a maimed, ugly, giant and the other blind, stuttering, and emaciated) and this is a really sweet read. I liked the book, but the following things were an issue for me.

The book is slow. It takes a long time for Brute to even meet Gray, and then a long time for anything to progress between them, and even once it does, there’s still a lot of book left. Because of this it did seem to drag at times.

Lastly, everything was too easy. For over a year Brute and Gray were never once interrupted, never once caught doing anything they shouldn’t. Then there is the whole last adventure, which I won’t spoil, but it’s all too easy. Until, in the end, a happily ever after is just dropped in their lap without their even pursuing it. People suddenly let old hurts go and forgive each other before running off into the sunset.

All in all, a sweet read that I’m glad to have spent time with, but not the home run I had hoped for. 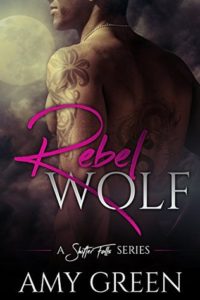 I picked up a copy of Amy Green’s Rebel Wolf when it was free on Amazon. It was still free at the time of posting.

Description from Goodreads:
Ian Donovan lives a life on the edge. The bastard son of an alpha, he’s a lone wolf fighting to survive in the Colorado wilds. No pack. No code.

Until the woman showed up.

Anna Gold studies shifters – their secret rituals, their renegade lives. Everyone knows shifters are untrustworthy and deadly, especially in the hard-luck, shifter-only town of Shifter Falls. But Anna has never met a wolf until the day she springs Ian from prison to study him.

Not only is Ian so hot he’s a distraction, he’s definitely dangerous. And he’s the wrong guy to fall for. Because the pack alpha is dead. A new leader must be chosen. An Ian’s three brothers want to kill him for it. No one said life in the Falls was easy…

Review:
This is pretty standard shifter paranormal romance. There isn’t a lot to make it stand out as superb or unusual. But for being bog standard PNR it does what it does quite well. The writing is good, the editing non-distracting, the dialogue smooth, the characters likable and the romance not insta-love (though being so short it doesn’t have a lot of time to develop). What I liked most was that Ian and Anna never played coy, dragging out a lot of misunderstandings and hidden feelings. She was willing to ask the obvious questions and he was willing to give honest answers about his feelings. That was quite satisfying.

As always, I thought the need to make the bad guy threaten to rape the heroine was unneeded. I really don’t understand why authors think they HAVE to make a villain a sexual deviant to make him evil. I mean, being a murder is enough all by its self. But somehow the heroine in such books always has to almost get raped. This is a trope I could do without, but seems to be as expected in the plot as a HEA. It’s so common I’m tempted to call it cliched, and how sad is that?!

For the most part, however, I enjoyed the book and I’d be willing to read more of the series.

Edit: As an aside, concerning the cover, I know it’s a small thing and authors don’t always have a lot of control over it, but when the character has very specific tattoos that are well described and play a part in the book, but the character on the cover has very different, non-related tattoos, readers notice. It’s a disconnect and annoying. Not to mention that the character is described as having longish hair, a beard and prominent scars on his back. People notice these things.