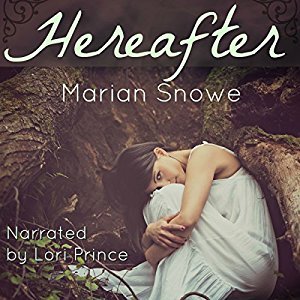 I received a copy of Marian Snowe‘s Hereafter through AudioBookBoom.

Description from Goodreads:
Detective Samantha Easton has always thought of herself as an adaptable person. But when she nearly dies after being shot on the job, Sam discovers something totally at odds with her rational, analytical personality: she can now see the spirits of people who have died, and she’s not finding it easy to adapt.

As if the sudden appearance of ghosts on the streets of Boston and her dead great-grandmother’s curious questions about her love life aren’t enough, Sam is being haunted by a mystery woman. This beautiful ghost, Mae, has no memories and is unable to move on from this life to whatever comes next—and she wants Sam to solve the mystery of her death.

Sam readily accepts the case, happy to get back to doing what she does best. There’s only one problem: falling in love with Mae wasn’t part of Sam’s plan.

As the two women unravel Mae’s secrets, they fall deeper in love with one another… But how can a ghost and a living person live happily ever after?

Review:
This was a pretty good f/f, ghost romance. It had a bit of a secondary mystery plot-line. I don’t feel it was solved adequately, so I’m not calling it a romantic mystery. I liked both Mae and Sam, and they were sweet together, even if the romance was a bit insta-love. I adored Sam’s investigative partner Patrick though.

The writing was pretty good, clean and easy to understand. Though the narrator, Lori Prince had a couple stylistic quirks that, over the course of the book, started to really irritate me. But they might not annoy other people. They really were about style, not quality.

[Mild spoiler] My biggest complaint here is that you never learn how or why any of it happened. There’s a connection to something from the past, but you never learn if there’s a reason for it. That whole aspect of the plot is never addressed and the book felt weaker for it. Without solving that particular mystery, the book was only left with the romance, which was fine, but why set up a mystery if you’re not going to solve it? 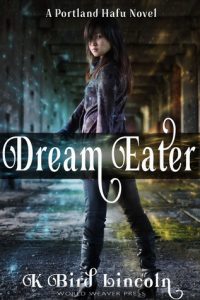 I won a copy of Dream Eater, by K. Bird Lincoln through LibraryThing.

Her whole life she’s avoided other people. Any skin-to-skin contact–a hug from her sister, the hand of a barista at Stumptown coffee–transfers flashes of that person’s most intense dreams. It’s enough to make anyone a hermit.

But Koi’s getting her act together. No matter what, this time she’s going to finish her degree at Portland Community College and get a real life. Of course it’s not going to be that easy. Her father, increasingly disturbed from Altzheimer’s disease, a dream fragment of a dead girl from the casual brush of a creepy PCC professor’s hand, and a mysterious stranger who speaks the same rare Northern Japanese dialect as Koi’s father will force Koi to learn to trust in the help of others, as well as face the truth about herself.

Review:
Not bad, I enjoyed it well enough. I thought Koi was a pleasantly strong character, if clueless. (I’ve been taking note lately of how often plots are based around young women not being taught their magical heritage until disaster strikes. And this was one more such plot.) I liked Ken, the hero, but didn’t feel he was particularly well fleshed out. The same could be said for all the characters, actually.

The writing isn’t bad, especially if you like things a little on the heavy, ponderous side. But I know there are those who don’t like the style and would call it too vague and purple. To each their own.

This book uses both Japanese and Native American mythology (and one reference to something Middle Eastern). I don’t know Lincoln’s nationality, but I did feel some of the Japanese felt a bit over-played, forced into places it wasn’t needed. I liked some of the authenticity (if Lincoln is Japanese and not just a good mimic), such as the male-slang. But some of the Japanese words, especially the couple that were repeated a lot, felt pretentious.

All in all, not a bad read. I’d pick up another by this author. In fact, I have another of her books that I’ll have to move up the To-Be-Read shelf. 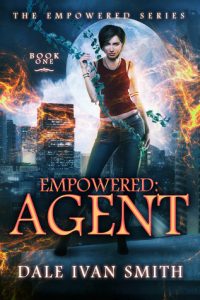 I picked up a copy of Dale Ivan Smith‘s Empowered: Agent when it was free on Amazon. It was still free at the time of posting.

Description from Goodreads:
The world says those with superpowers are either heroes or villains. But what if you’re both?

Mathilda Brandt isn’t the angry, out-of-control teenager she was before she got out of jail. She’s hungry for a chance at a normal life, but when a gang threatens her sisters, she has no choice but to use her illegal superpower to protect them.

A secretive government agency gives her a choice: go back to prison for life, or infiltrate a notorious super-villain group in order to stop a psychotic Empowered. To save her city, her family, and herself, Mat must become the last thing she ever wanted to be again: a criminal.

Review:
Not bad, sort of your standard girl with superpowers gets pulled into something she doesn’t want to do and then goes about kicking ass and taking names. I thought she was a little too quick to jump to the “I need to kill this guy” stage, but I also felt her conundrum.

I do, however, have to ask such YA heroines always have to be so unfailingly aggressive and unpleasant. And I’m not just talking about Mat either. All the young women who wanted to look tough were just bulldogs with spiky personalities. I swear, you’d think this was the only version of tough authors had ever heard of.

All in all, not bad, just nothing superb or stand-out about it either. It felt a little short on details, considering how long it was, but had enough action not to drag. I’d be willing to read another of the series, but I’m not racing out to buy the sequel either. A solid 3-star read.