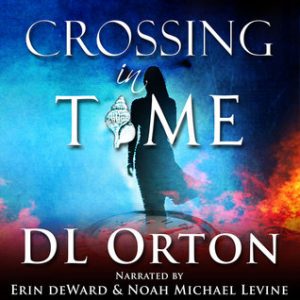 I won an Audible copy of Crossing in Time (by D.L. Orton) through AudaVoxx.

Description from Goodreads:
Race against the clock through a dystopian nightmare. Climb naked into an untested time machine (carrying only a seashell and a promise). Wake up twenty years younger on a tropical beach, buck naked and mortally wounded, with your heart in your throat.

This is a journey of love, loss, and redemption that will make your pulse gallop and your palms sweat, have you laughing out loud through your tears, and leave you flush with the sublime pleasure of falling in love.

Review:
Look, I simply did not like this book. I’ll admit that the editing seems fine. (I listened to the audio, so I wouldn’t know if there are a lot of copy edit mistakes, but it sounded structurally competent.) But the farther into it I got the more I hated it, until I simply had to force myself to finish it. I would literally dread pushing play, too afraid of what new shit way the book would find to piss me off. Yes, I’m serious with that attitude. I hated this book.

Before I get into why, let me pause and be positive about the narrators. They both did a marvelous job, Noah Michael Levine especially. Erin deWard did a good job too, but the choice to voice Isabel sounding so desperate all the time only exacerbated my problem with her. But that was a style choice, not a quality problem. The narration is good.

Now back to the negative. It’s all freakin’ negative from here and there will be SPOILERS. I’m going to start with the romance, or lack there of. Two people (ex lovers) accidentally run into each other after not seeing one other for 15 years. They go to dinner, have a fight (about their past), she walks out. There’s a bit of drama requiring him to rescue her from a burning building and he asks her to marry him before they get out. That’s the romance and we’re suppose to believe it’s the romance to end all romances. Meant to be and all that jazz.

Here’s my issue. First, it’s 100% unrealistic. Yes, this is fantasy/sci-fi, but people change a lot in 15 years and this isn’t addressed. Two, if it’s so perfect they wouldn’t have given it up so easily 15 years earlier and/or would have made contact before 15 years passed. And he apparently had her cell number the whole time. It didn’t change. (And don’t think I’m not seriously side-eyeing someone having the same cell phone number for 15 years. Anyone remember what cells were like in 2000?) Three, as a reader I felt cheated out of seeing them get to know each other and fall in love. I suspect Orton meant for the reader to feel this in the second time-line, but I 100% DID NOT. Because that was not romantic either. That was Isabel being incompetent and Diego being unbelievably sway-able.

Now let me move on to my big issue. Diego was lovely, too wonderful actually. But you can’t help but like him. Isabel however was cliched beyond belief. Let me tell you her role in this book (and this just off the top of my head). She almost dies saving a kitten (not even her kitten, just a random kitten) and has to be saved from being burned and crushed in a fire. She gets stabbed. She gets septic. She almost gets raped (and turns out to probably actually have a history of being raped). She essentially gets kidnapped by her ex-husband. She almost dies in a miscarriage and she gets sick and almost dies from traveling through dimensions. And I lost count of how many times she was either in debilitating pain or confused because she’s barely conscious. She was the perpetual victim. I hated her. Or rather I hated that Orton could come up with no better role for her than to be the victim that spurs Diego into action.

Their love is supposed to save the multi-verse. But Diego gets to go through to another world and retrieve a vaccine, bring it back and save millions. Isabel? She gets to travel through dimensions to teach Diego to be a better lover to her apparently unstable future self. How do I feel about that? Fuck you Orton. Isabel was supposed to be a smart scientist. She never does anything intelligent in the entire book. She’s too busy navel gazing and being cliche.

Speaking of science, it’s all hand waving. I actually think calling this science fiction is almost a stretch.

I find myself in a difficult position now. I think I won this audio book and I have the second book too. I feel obligated to listen to it. But considering how much I hated this one, I just don’t want to.

On an amusing side note, I had to call the fraud department of one of my charge cards this morning and the person I spoke to (Tomeo) had a lovely accent that sounded very much like how Noah voiced Diego. It was quite charming and made me smile. 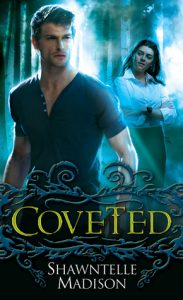 I picked up a signed copy of Coveted, by Shawntelle Madison in a second-hand shop.

Description from Goodreads:
For werewolf Natalya Stravinsky, the supernatural is nothing extraordinary. What does seem strange is that she’s stuck in her hometown of South Toms River, New Jersey, the outcast of her pack, selling antiques to finicky magical creatures. Restless and recovering from her split with gorgeous ex-boyfriend, Thorn, Nat finds comfort in an unusual place: her obsessively collected stash of holiday trinkets. But complications pile up faster than her ornaments when Thorn returns home—and the two discover that the spark between them remains intense.

Before Nat can sort out their relationship, she must face a more immediate and dangerous problem. Her pack is under attack from the savage Long Island werewolves—and Nat is their first target in a turf war. Toss in a handsome wizard vying for her affection, a therapy group for the anxious and enchanted, and the South Toms River pack leader ready to throw her to the wolves, and it’s enough to give anybody a panic attack. With the stakes as high as the full moon, Nat must summon all of her strength to save her pack and, ultimately, herself.

Review:
This was not very good. It was simply dull and inconsistent. One moment the narrator was going on about how Nat had no friends, the next her best friend was showing up on her doorstep. One moment she’s being treated like a pariah by her family, the next they’re there for her. (And visa versa, they flipped several times.) For the whole book Nat was completely spineless, super subservient and inferior to everyone, then she randomly whipped out the alpa attitude.

Then there was all the back and forwards with Thorn. The fact that he abandoned her five years earlier and basically ruined her life wasn’t ever addressed. This irritated me on two fronts. First that the loss of a man ruined her life and no one seemed to blame him for the dick move or give her time to grieve. (Instead they made her condition significantly worse by being inconsiderate and then further blamed her for the predictable results). Second he was never expected to apologize or even explain and she instantly forgave him. Worse, she’d been waiting for him for 5 years without word and didn’t seem to need to forgive him.

This forgiveness for men carried over in the whole book. Nat was thrown out of the pack and practically disowned by her family for not behaving just as they want (they called it being weak). But her brother was a womanizing ass, her father a killer, the alpha cruel, and her love was fickle and disloyal. Still, no one ever did anything by praise and support them.

I disliked the book. I can come up with a dozen reasons why, but the main one is that Nat was so weak, and whiny that I basically hated her. I thought her OCD was interesting, but that wasn’t enough to make me warm up to someone so willing to be a doormat and who shows NO GROWTH throughout the book. 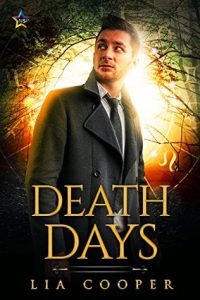 I received a copy of Lia Cooper‘s Death Days from Netgalley.

Description from Goodreads:
By day, Professor Nicholas Littman works as an itinerant professor at a small college in the Pacific Northwest. He teaches seminars on mythology and the intersections of folklore and magic in the ancient world. By night, he’s the local necromancer, a rare magical talent that has left him alienated from other practitioners.

All Nick wants from life is to be left alone to run his magical experiments and teach kids the historical context of magic without anyone being the wiser. Unfortunately, his family is sworn to sit on the council of the Order of the Green Book—a group of magicians dating back to the Crusades—and they aren’t willing to take Nick’s no for an answer.

As though that wasn’t bad enough, a coven of Night Women has arrived in town, warning Nick that there are wolves at his door he had better take care of. But what can one necromancer do when every natural and supernatural card seems stacked against him?

Review:
I was totally confused by this book. I went in thinking it would be m/m Paranormal Romance, because that’s what I’ve read from Lia Cooper in the past and it’s a lot of what Nine Star Press publishes, but it’s not. The main character is gay and there is a character that might be a romantic partner in some future book (if one is coming), but there’s no romance here. So, do yourself a favor and go in expecting Urban Fantasy and you’ll be a lot happier with the result.

Of course there’s nothing really wrong with not being the genre I expected. That’s not a sign of poor quality. Poor marketing maybe, but not quality. But I wasn’t all together thrilled with the book in general. If anything, it felt like a 250 page prequel to a larger novel. I finished the book feeling very much like, “Well, we’ve got the background sorted. Now the story can start.”

None of the various threads wrapped up. I mean NONE. The big mystery is set up and never even addressed. Nick spends the whole book avoiding being roped into the council, but we don’t know what happens with that. There’s the set up of a maybe romance. But it’s not delved into at all. Nothing ends…just like in all those silly ‘prequel novellas’ that were popular last year. And do you remember how I feel about them?

I found the mechanical writing fine and the banter between people was good. But the story is slow and I found the narrative a bit flat. Things happen, but I never felt much invested in the outcomes. Nick seemed equally concerned that he submit end of terms grades on time as with the ‘hole in the world,’ new werewolf, and creeping vampires. And if he couldn’t hustle up any emotional reaction, neither could I.

All in all, I didn’t love it, but I didn’t hate it either. I’d read the next to try and see the outcome. Now, I gave this a 3-star rating on Goodreads, but if it turns out that this is meant as a stand-alone I’ll going coming back and rerating it a one star. There’s no way this is complete.